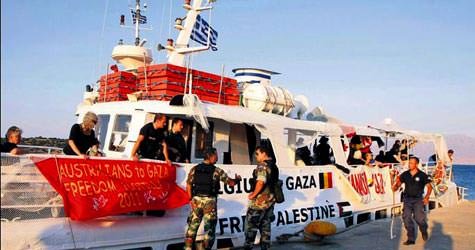 Turkey's prime minister said on Friday Israel must apologize for a bloody raid on a Turkish ship bound for Gaza last year and lift its blockade of the territory if it wants to normalize ties, but Israel rejected the call.

In a speech to parliament ahead of the expected release of a U.N. report on the raid, Prime Minister Tayyip Erdoğan gave no sign of softening despite reports in recent weeks that the two sides have been holding secret talks to mend fences.
Ankara has repeatedly demanded Israel apologize and pay compensation for the killing of nine pro-Palestinian Turkish activists when Israeli marines seized the Mavi Marmara ship heading to the Gaza Strip last year.
"Normalization of relations between the two countries is unthinkable unless Israel apologizes for this illegal act which is against all international law and values, pays compensation to the relatives of those who lost their lives in this atrocious event and lifts the embargo on Gaza," Erdoğan said.
Israel has agreed in principle to pay compensation only and has ruled out issuing an apology, saying it would be unwarranted and dishonorable.
An Israeli official told Reuters on Thursday a U.N. inquiry commission on the seizure chaired by former New Zealand premier Geoffrey Palmer was due to publish its report on July 27, after delays to enable further talks between Israel and Turkey.
In remarks to Israeli Channel 1 television on Friday night, Israel's Defense Minister Ehud Barak dismissed Erdoğan's call for an apology and said he expected the United Nations inquiry to vindicate Israel's actions.
"Israel did not commit any crime ... (in my opinion) the Palmer commission will (say) that Israel acted according to international law. The blockade is legal, stopping the ships is legal, the use of force in these circumstances is justified," Barak said.
Israeli officials have also voiced concern that the marine commandos, who they say acted in self-Defense after being attacked by passengers, would be exposed to prosecution abroad because an apology would be seen as an admission of culpability.
FINAL WORDING
Turkish and Israeli officials are reported to be trying to overcome disagreements over the final wording of the report.
A Turkish official told Reuters on Friday that it was Turkey's view that the Palmer report should not deviate from the U.N. Human Rights Council report issued last September, which branded both the blockade and the Israeli raid as "illegal."
"We are expecting any legal element mentioned in the report regarding the blockade not to contradict the established rules of the international law and not to contradict the report published by the UN Human Rights' Council," the official, who requested anonymity, said.
Israel had boycotted the human rights council's panel, calling it biased.
Israel says the blockade is warranted to prevent arms reaching Gaza's ruling Hamas Islamists, who are hostile to the Jewish state. Palestinians and their supporters regard it as illegal pressure on the heavily aid-dependent strip.
Turkey's friendship with Israel withered after Erdoğan condemned an Israeli offensive launched in Gaza in December 2008, and relations went into deep freeze after the Mavi Marmara incident.