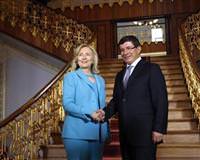 U.S. Secretary of State Hillary Clinton said on Saturday that Turkey could serve as a democratic model for the Middle East but warned about Ankara's efforts to limit media and restrict freedom of expression.

Clinton, wrapping up a two-day visit to Turkey designed to smooth ties after a period of tension over Iran and other issues, said Turkey and the United States were natural allies on a range of global challenges.
But she pointedly criticized Turkey on what she said were moves to jail journalists and impose new limits on freedom of expression in the country, which hopes for European Union membership.
"People across the Middle East and North Africa are seeking to draw lessons from Turkey's experience," she said in an appearance with Turkish Foreign Minister Ahmet Davutoğlu, saying it was important to protect both free expression and the rights of minorities.
Earlier, during a televised media interview with a group of young people at an Istanbul coffee shop, Clinton said she was concerned by the crackdown, which has also sparked a rebuke by the Council of Europe.
"I don't think it is necessary or in Turkey's interest to be cracking down," Clinton said. "It seems to me inconsistent with all the other advances that Turkey has made. As someone looking at it from the outside, I don't understand it."
Several Turkish journalists were detained this year in connection with an alleged plot to overthrow the government.
Media watchdogs say about 60 journalists are in jail, many working for pro-Kurdish or leftist publications. The Council of Europe commissioner for human rights said in a report this week Turkey should take urgent measures to address a situation he called "particularly worrying.
Turkish officials say those journalists in prison are generally there not due to what they have written but to other, illegal activities. They argue the government has improved media freedom in its time in power.
Clinton expressed strong U.S. support for Turkey in its battle against the militant Kurdistan Workers Party, or PKK, whose fighters killed 13 Turkish soldiers on Friday in the worst attack since February.
But she said Turkey should expand its political participation so "Kurdish Turks can feel fully part of Turkey while still believing they can maintain those aspects of their Kurdish identity that are important to them."
Promises by Prime Minister Tayyip Erdoğan, who won a third term last month, to reform the constitution were an opportunity to address those concerns and advance Turkey's long-stalled bid for EU membership, which the United States supports, Clinton said.
GROWING COOPERATION
Clinton highlighted booming economic ties between the United States and Turkey -- an emerging regional power boasting an 11 percent growth rate. Trade between the United States and Turkey is up more than 50 percent this year, and U.S. officials say the country is a big opportunity for U.S. business.
Clinton's meetings included Erdoğan and President Abdullah Gül and also focused on increasing diplomatic cooperation between Ankara and Washington on the conflict in Libya and crisis in Syria, Turkey's immediate neighbor.
Turkey has not matched the United States and European Union in imposing financial and travel sanctions on Syrian President Bashar al-Assad and his inner circle.
But U.S. officials say Ankara, which on Friday hosted a meeting of the international contact group on Libya, has been a strong diplomatic voice for change in the Arab world, adding weight to efforts to back peaceful protesters.
Both Clinton and Davutoğlu expressed support for Syrian opposition groups, which were holding a separate meeting in Istanbul to discuss tactics against Assad.
"Efforts by the opposition to come together to organize and to articulate an agenda are an important part of political reform," Clinton said. "So we're encouraged by what we see the Syrian people are doing for themselves."
Clinton downplayed strains over Iran, where Turkey opposed the imposition of a fourth round of U.N. sanctions on Tehran last year over its nuclear program. U.S. officials have said they remain concerned over Turkey's economic ties with Iran.
"We did have our differences over the vote in the United Nations, but our shared view is that we want to do everything we can together to convince and prevent Iran from having a nuclear weapon," Clinton said. "There is no daylight at all between us."