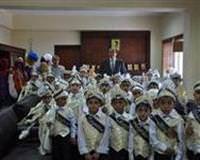 As an exercise in good governance, the mass circumcision ceremony for some 100 boys from disadvantaged families in an old Istanbul square ticks a lot of boxes for Turkey's ruling AK Party and its voters.

"Circumcision is an important tradition in Islam," Mayor Ibrahim Kavuncu told Reuters with pride as he watched the boys and their families assemble in a square fronting Eyup Sultan Mosque to perform religious rites.

Draped in blue cloaks over cream satin shirts and wearing caps, the boys each carry a small staff. Shepherded into a circle around a janissary band, they practice waving the staves in time to the music.

A day later they will go to a private hospital for a fully paid circumcision.

In AK-controlled municipalities like Eyup, a gritty and pious neighborhood on the southern side of the Golden Horn inlet, connecting with people means giving them what they want.

For any good Muslim family that would include having their boys circumcised, observing religious rites and providing a small feast for relatives and neighbors.

"We place great importance on the festival, not only because it's a tradition but it offers a chance for healthy and hygienic operations for children," says the mayor.

Built on the site where the Prophet Mohammed's standard-bearer was reputed to have been buried during the Arab siege of Constantinople in 670, Eyup Sultan Mosque holds a special place in the history of Islam in Turkey.

And many fathers from outside the neighborhood and beyond Istanbul, bring their sons here to pray when they are circumcised.

For the boys the operation will mark an early affirmation of their faith and a step toward manhood -- albeit though some are infants and others are some years off puberty.

For their families, it is a religious obligation, but also an expense that many find difficult to afford. The operation can cost anywhere between $300 and $800, while paying for the spread and celebrations can typically cost over $1,000.

Dr. Sefik Ersan, an Ankara-based surgeon who has carried out more than 5,000 circumcision operations, estimated that only 10 to 15 percent of Turks take their kids to surgeons.

Many parents choose to pay non-qualified "sunnetci" -- traditional circumcisers who often pass their skill from father to son -- or barbers despite the risks of performing the procedure outside a hospital or clinic.

"Some parents demand the operation to be carried out at home. I tell them complications may occur, although the chances are one in a thousand," Dr. Ersan said.

"Breathing may stop, or drug allergies may be observed. Intervention in such a case would be much harder at home, it's best not to take risks and take their kids to a medical facility in line with their financial resources."

"Other more common complications include infections, bleeding, damage to the urinary tract, intoxication, gangrene of penis head," he said, before adding another danger that may haunt the boy in later life.

"It's highly possible that the penis head is cut a little too much and the kid will suffer premature ejaculation when he grows up."

A study over a 10-year period in Turkey showed that of 200 boys admitted to hospital with post-circumcision complications, some 85 percent had been circumcised by traditional circumcisers, 10 percent by health technicians and five percent by doctors. Out of the 200, one two-year-old boy died from a hemorrhage.

Standing in the summer heat beside the Eyup Sultan Mosque, a watching mother Hanim Akkas, has two sons, 5 and 8 years old, in the circle.

"We could not even imagine affording an operation at a private hospital. We are very happy with this opportunity. May God bless the mayor."

Her youngest, Eyubensar has absolutely no qualms.

"I'm not afraid. I'll become a man," said the five-year-old. "My big brother is also becoming a man. We are brave."

Some are aware of what is in store, but they all appear bemused by the ceremony and startled by the booming percussion.

Inevitably a few cling, sobbing to the skirts of their head-scarfed mothers, resisting efforts to round them up.

Their reward at the end of a long hot day will be a cruise on the Bosphorus strait, again laid on by the municipality.

The AK, a socially conservative party, won a third consecutive term in power in an election last month and is often cited as a model for Islamists elsewhere who want to join the political mainstream within a democratic system.

Kavuncu denies the provision of circumcision is aimed at filling the AK vote bank. The municipality also organizes celebrations for young men about to go for military service, and religious festivals, and the breaking of fast during the Muslim holy month of Ramadan.

When Ramadan begins in August this year, the Eyup municipality plans an open-air breaking of fast for 20,000 people on the Galata Bridge, straddling the Golden Horn.

The funding of municipalities has been a bone of contention between the Turkish government and the International Monetary Fund when the two were negotiating a possible new stand-by loan agreement, an option Turkey eventually turned down last year.

Regardless of any political bonus, the provision of free circumcision helps reinforce common religious and cultural values, while embracing more progressive standards of hygiene.

World Health Organization data suggests that circumcision is the norm for Turkish men regardless of whether their families are observant or more-secular minded Muslims.