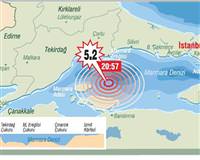 Last night, the northwestern Tekirdağ region was rocked by a 5.2 magnitude earthquake. Experts are divided on how to define the rattler; some claim it was a precursor to the anticipated ‘big one’ in Istanbul. The Prime Ministry warns last night’s quake; “Should be taken seriously.”

The Marmara Sea was shaken by an earthquake measuring 5.2 on the Richter scale yesterday evening at 20:57. The quake, with an epicenter located 15.3 kilometers deep off of the Tekirdağ shore was felt in a number of provinces including both Tekirdağ and Istanbul. Following the earthquake, citizens flocked to the streets, however there were no reports of injury or damage.

FIVE AFTERSHOCKS
The earthquake was most strongly felt in Istanbul's Silivri, Çatalca and Büyükçekmece districts. Although the quake ignited momentary panic in both Edirne and Kırklareli, there was no damage or injury. The 5.2 magnitude quake was followed by a series of five aftershocks, the largest of which took place just 20 minutes later and measured 2.9 on the Richter scale.

PRIME MINISTRY: THIS IS SERIOUS
The Prime Ministry Emergency and Natural Disasters Department (AFAD) Executive Board Member Prof. Dr. Orhan Tatar states: ''At present, there is a 170-kilometer long fault line located in the Marmara Sea which is just waiting to crack. Although this earthquake did not result in surface cracks or damaged structures, it still needs to be taken seriously. This earthquake was a warning. What needs to happen now is we need to act cold-blooded and prepare in the best manner possible for a potential large earthquake.''

TEKİRDAĞ'S EARTHQUAKE ALSO FELT IN ISTANBUL
The earthquake which transpired at 20:57 yesterday evening and was based off of the shore of Tekirdağ was also felt in Istanbul, Edirne- Kırklareli and Bursa. Lending to short-lived panic, the earthquake was most strongly felt in coastal regions such as Silivri and Büyükçekmece.

Kandilli: Normal activity
According to the Bosphorus University Kandilli Meteorology and Earthquake Research Institute's (KRDAE) National Earthquake Tracking Center (UDİM) Manager Dr. Doğan Kalafat claims that last night's earthquake was the result of normal activity in the Marmara Sea and states, "This is in no way a situation in which to be afraid. I suggest that our citizens remain calm."

EXPERT OPINION
Naci Görür
'This earthquake supports our warnings.'
İTÜ Mining Faculty Professor Dr. Naci Görür: "We are the team that is mapping the fault line that runs along the Marmara. This earthquake supports our warnings. It is a precursor to the big one. We are expecting an earthquake in the region that will measure at least 7.2 in magnitude. We expect it to transpire anytime up until 2029. What we need to take in from this earthquake is that the floor of the Marmara is being stretched and energy is building up which in time will lead to an earthquake."
Ahmet Ercan
'I am not anticipating a larger earthquake'
Prof. Dr. Ahmet Ercan: "We are expecting an earthquake of up to six in magnitude. This earthquake lasted six seconds. There must have been cracks. It appears that due to a crack, there is a veering to the south in Tekirdağ. This is a precursor for an earthquake. However, I do not anticipate this earthquake will be any larger. We need tens of years to pass for it to be a larger earthquake. For an earthquake to be destructive in this region, it must be bigger than 6.5 in magnitude. Our public may continue their vacations in peace."
Oğuz Gündoğdu
'I can't say it isn't a precursor.'
Istanbul University Geophysics Department Professor Lecturer Dr. Oğuz Gündoğdu: "It appears to be located on the fault line we were expecting to crack. This is not a surprise. There has not been an earthquake bigger than five magnitudes in the Marmara until now. Those who are involved in this issue cannot say, 'don't worry nothing will happen.' I can't say definitively one way or the other whether a big earthquake will transpire."
Şükrü Ersoy
'It will be smaller than seven magnitude.'
Yıldız Technical University Natural Sciences Research Center Chairman Prof. Dr. Şükrü Ersoy: This is one of the locations where a big earthquake could develop. A 5.2 magnitude earthquake will not break the earth's crust however it does display the existence of a dynamic fault line there. This could be a precursor to an earthquake, or a small one could follow. There is no guarantee for what we say, however if the size of the crack is small, then an earthquake will be smaller than seven magnitude."