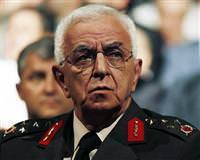 While a solution was being sought to counter the crisis expected at the upcoming Supreme Military Council, yesterday the Chief of General Staff and three armed forces commanders decided to hand in requests for retirement. The decision which followed a summit at Çankaya Palace has suddenly altered Turkey’s agenda.

Prior to the Supreme Military Council set to commence on Monday, a wave of retirement requests from the top military brass has rattled the Turkish Armed Forces.
Chief of General Staff Işık Koşaner requested retirement yesterday, two years earlier than planned, citing a series of arrests in the Sledgehammer Operation, followed by a new wave of arrests requested yesterday by prosecutors as well as the criticism directed towards TAF following the attack in Silvan which resulted in the deaths of 13 soldiers as being the reasons behind his decision.
Koşaner's decision was followed by retirement announcements also made by Land Forces Commander General Erdal Ceylanoğlu, Naval Forces Commander Admiral and Air Forces Commander Hasan Aksay. Even though General Ceylanoğlu, Aksay and Admiral Yiğit refrained from providing reasons behind their request to retire, as of August 30th they would have reached the age limit for retirement.
A series of meetings held between Koşaner and Prime Minister Erdoğan and President Gül prior to the Supreme Military Council revealed there was an issue surrounding the number of 'arrested generals'.
Koşaner defended the notion that the arrests of commanders being held with trials pending posed an obstacle to their participating in the council is a form of punishment.
Expressing his expectations that efforts would be made to this effect, General Koşaner stated that it was his conviction that the process go forth according to the laws and independent judiciary.
General Koşaner reiterated his expectations for a solution during a surprise summit held yesterday with president Gul and Prime Minister Erdogan at the Çankaya Palace. Koşaner put forth his desire for the arrested commanders to be able to at least use the option of prolonging their retirement should it come to that.
Following the meeting in the Çankaya Palace, Koşaner returned to the General Staff Headquarters where he was informed that in connection to another military plot investigation, prosecutors sought the arrest of 22 additional armed forces staff including the commander of the Aegean army Nusret Taşdeler. According to the information obtained, after receiving the news of this development, Koşaner met with three Armed Forces Commanders to evaluate the situation. After which, Koşaner gave a concise farewell speech in the headquarters conference hall to colonel's and higher level military officials.
When news surfaced of Koşaner's request for retirement, President Gül and Prime Minister Erdoğan were just about to leave for Istanbul. In fact, Gül's helicopter was being prepared to head for Esenboğa Airport. When they received the written request for retirement by courier from the General Staff Headquarters both President Gül and Prime Minister Erdoğan cancelled their programs to remain in Ankara. The helicopter which was to take President Gül to the airport with propellers reeling was stopped at the Çankaya Palace.