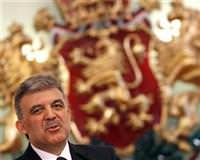 President Abdullah Gül denied on Saturday that Turkey faced a crisis after the resignation of the country's four most senior military commanders, but acknowledged this had created an "extraordinary" situation.

The departure of the generals has caused turmoil in the military, giving Prime Minister Tayyip Erdoğan an opportunity to extend his authority over the once-dominant armed forces, the second biggest in NATO.

Chief of General Staff General Işık Koşaner stepped down on Friday evening along with the army, navy and air force commanders in protest over the detention of 250 officers on charges of conspiring against Erdoğan's government.

In a farewell message to "brothers in arms," Koşaner said it was impossible to continue in his job as he could not defend the rights of men who had been detained as a consequence of a flawed judicial process.

Relations between the secularist military and Erdoğan's socially conservative Justice and Development Party (AK) have been fraught since it first won power in 2002, due to mistrust of the AK's Islamist roots.

While the departures are embarrassing, they could give Erdoğan a decisive victory over a military that sees itself as guardian of the secularist state envisioned by the soldier statesman and founder of modern Turkey, Mustafa Kemal Ataturk.

"Nobody should view this as any sort of crisis or continuing problem in Turkey," Gül, a former top AK member, told reporters on Saturday. "Undoubtedly events yesterday were an extraordinary situation in themselves, but everything is on course."

Erdoğan designated Koşaner's successor on Friday, as his office put out a statement naming paramilitary Gendarmerie commander General Necdet Özel as new head of land forces and acting deputy chief of general staff, effectively making him next in line when Koşaner handed over the baton.

In years gone by, Turkey's generals were more likely to seize power than quit. They have staged three coups since 1960 and pushed an Islamist-led government from power in 1997.

Some founders of AK, including Erdoğan, were members of the Welfare Party, an Islamist party whose coalition was forced out 14 years ago. But as prime minister, Erdoğan has ended the military's dominance through a series of reforms aimed at advancing Turkey's chances of joining the European Union.


The latter-day subordination of the generals was starkly demonstrated last year when police began detaining scores of officers over "Operation Sledgehammer," an alleged plot against Erdoğan's government discussed at a military seminar in 2003.

The officers say Sledgehammer was just a war game exercise and the evidence against them has been fabricated. About 250 military personnel are in jail, including 173 serving and 77 retired staff. Most are charged in relation to Sledgehammer.

A court accepted on Friday an indictment over another alleged military plot, known as the "Internet Memorandum" case, and prosecutors asked for the arrest of 22 people including the Aegean army commander and six other serving generals and admirals.

The detentions have sapped morale and spread mistrust and suspicion among the officer corps, and many had been looking for Koşaner to take a stand since his appointment last August.

More than 40 serving generals, almost a tenth of Turkey's commanders, are under arrest, accused of a various plots to bring down the AKP.

The main opposition CHP said the army should stay out of politics but warned against the AKP exploiting its power.

"It is not right to draw soldiers into politics but there is no benefit in vilifying, smearing or undermining their dignity day and night," senior CHP deputy Emine Tarhan told a news conference.

The government statement said the four commanders had retired and made no mention of the reasons why. It said a meeting of the Supreme Military Council, which meets twice-yearly to make top appointments, would go ahead as planned on Monday, showing Erdoğan is in a hurry to restore the chain of command and present an image of business as usual.