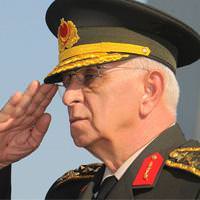 Turkey said on Friday its top four military chiefs were all seeking retirement, in moves that appeared to reflect a deep rift between the secularist military and a government with roots in political Islam.

The reason for the generals' move was not immediately clear, but tensions between the military and the government of Prime Minister Tayyip Erdoğan have run high in recent years.
The Supreme Military Council is due to hold a major twice-yearly meeting next week dealing with key appointments and President Abdullah Gül and Erdoğan met Koşaner on Friday to discuss the matter.
Following the announcement Erdoğan met the head of Turkey's gendarmerie paramilitary force, General Necdet Özel, and they subsequently went separately to the presidential palace to meet President Abdullah Gül, fuelling speculation Özel may be appointed to replace Koşaner.
By tradition, the head of the ground forces replaces the armed forces chief when he retires.
Friction between the government and military, traditionally guardians of the secular state, has been fueled by the continuing trial of 200 military officers accused of plotting to overthrow the government.
The "Sledgehammer" case, arising from an alleged coup plan presented at an army seminar in 2003, is one of several setting Turkey's secularist establishment against Erdoğan's ruling AK party. Critics say AK has a secret Islamist agenda, an allegation it denies.
Some 165 military personnel, including more than 40 generals, are in custody in the coup plot trials, severely damaging the military's operational ability.
The Turkish lira weakened sharply on the news to 1.6964 against the dollar from an interbank close of 1.6805 on Friday.
MILITARY PROMOTIONS
The Supreme Military Council (YAS) meeting, set to start on Monday, could now be postponed. A row over appointments emerged ahead of last year's YAS, but was resolved by delaying some appointments and the retirement of some senior officers.
A prosecutor investigating another alleged plot involving military officers on Friday sought the arrest of 22 people including the commander of the Aegean army, media reports said. It was not clear if the generals' move was linked to this.
There was uncertainty in financial markets about what the decision by the generals meant, amid reports that their retirement was looming anyway, but Royal Bank of Scotland economist Timothy Ash said it appeared to be a "symbolic step."
He linked it to the coup plot trials, including those targeting "Ergenekon," an alleged secret network involved in anti-government conspiracies.
"It seems to relate to issue of military promotions stalled by legal action around Ergenekon," Ash said.
"Hard to see the military winning this battle, given the ruling AK Party got 50 per cent poll support in the June elections, and now dominates institutions of state," he added.
The Turkish armed forces carried out three coups between 1960 and 1980 and pressured the country's first Islamist-led government out of power in 1997.
Such intervention is no longer regarded as feasible, as the power of the military has been curbed sharply under reforms carried out by Erdoğan's government with the aim of winning European Union membership.
Koşaner, who took over as head of the armed forces in August 2010, is regarded as a hardline secularist, but he has kept a lower profile than previous chiefs of the general staff.
Alongside Koşaner, the land forces head Erdal Ceylanoğlu, air forces chief Hasan Aksay and navy commander Uğur Yığıt have also sought retirement, the reports said.
The announcement comes amid an upsurge in violence in southeast Turkey in the military's battle against separatist Kurdistan Workers Party (PKK) guerrillas.