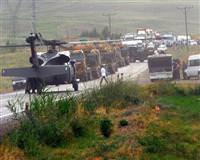 They said the convoy was passing through Başkale in Van province when the PKK terrorists opened fire.

There were unconfirmed media reports that a district official and his bodyguard were wounded in the attack, which occurred near Turkey's mountainous border with Iran.

The PKK ended a six-month old ceasefire in February and moved to what it calls an "active defense" stance, whereby its fighters defend themselves if threatened.

There has been a steady stream of terrorist activity in recent weeks, including abductions, in a 27-year-old insurgency which has killed more than 40,000 people.

The jailed leader of the PKK, Abdullah Öcalan, sent word through his lawyers last month that he had agreed with Turkish officials to set up a "peace council" aimed at settling the conflict. There has been no further word on the initiative.