Yaş gets a new order 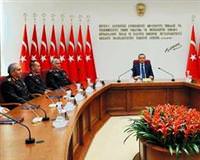 The Supreme Military Council or YAŞ, which convened for the first time under Prime Minister Erdoğan’s sole leadership, also went on to mark a number of firsts. From here on out in the new YAŞ era on the left of the Prime Minister will sit the Minister of National Defense and on his right will be the Chief of General Staff.

TWO MEMBERS DETAINED: According to mandate, regular member of the Supreme Military Council War Academies Commander General Bilgin Balanlı was unable to attend the meeting due to his detainment in the Sledgehammer case, however he did retain the write to send a letter regarding the items on the council agenda. However, General Balanlı refrained from doing so as no such letter was presented at the council.
A COMMANDER WITH A WARRANT FOR HIS ARREST: Despite a warrant issued for his arrest in connection to the 'Internet Memorandum' case in which it is alleged that certain military members conducted propaganda against the state on certain internet websites, Aegean Army Commander Nusret Taşdeler did attend the meeting.

GÜL TO HOST COUNCIL DINNER
President Abdullah Gül will be hosting a dinner tomorrow evening for members of the Supreme Military Council. The dinner has been scheduled for 20:10 to coincide with the designated time for the breaking of the fast for Ramadan.