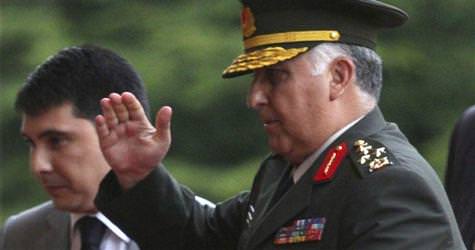 When the head of Turkey's military quit in protest along with the commanders of the army, navy and air force, it left one man standing in Turkey's high command - General Necdet Özel.

The 61-year-old head of the paramilitary Gendarmerie was promptly called to meet Prime Minister Tayyip Erdoğan and President Abdullah Gül on Friday and told he would be acting chief of the armed forces.
Özel now stands to get the job on a permanent basis, two years sooner than he might have expected, according to media reports that suggest Erdoğan had earmarked him to take over from General Işık Koşaner if he had retired as scheduled in 2013.
Instead Koşaner and the three service commanders requested early retirement in protest against what they saw as unjust prosecution cases against 250 retired and serving officers detained on charges related to various coup conspiracy cases.
Özel is now expected to be confirmed as the new chief of general staff for NATO's second largest military by the end of a four-day meeting of the Supreme Military Council (YAS) on Thursday.
Özel has stood apart throughout the confrontations between Erdoğan's ruling AK party, a socially conservative party with roots in political Islam, and the fervently secularist military.
He gathered positive reviews in the media for past comments that revealed a commitment to acting within the law, while other officers have been accused of brutal violations in a fight against a long-running Kurdish separatist insurgency.
"During my period of duty, we conducted the struggle against separatist terrorism totally within legal regulations," Özel said in a farewell speech when he stepped down as chief of the 2nd Army, based in the southeast province of Malatya.
"We did not allow any non-legal activity. To put it another way, we did not cover anything up. This gives me peace of mind," he said, in remarks that distanced his command from accusations of military misconduct elsewhere in the Kurdish conflict.
"VALUES OF THE REPUBLIC"
A reference to the law also popped up this weekend in Özel's farewell message to gendarmerie comrades, with a dutiful nod of respect to Mustafa Kemal Ataturk, the soldier-statesman who founded modern Turkey in 1923 out of the ashes of the Ottoman Empire.
"In the words of our eternal chief commander Gazi Mustafa Kemal Ataturk, our gendarmerie is 'an army of law, an example of humility, sacrifice and self-denial, faithful to the homeland, nation and republic'," Özel wrote.
He also said the gendarmerie was "bound to the values of the republic," values which have always put a heavy emphasis on the state's secularism.
Having overthrown three civilian governments between 1960 and 1980, and forced out an Islamist-led government in 1997, the military has had its power considerably reduced through reforms undertaken by Erdoğan aimed at strengthening democracy in Turkey to boost its chances of joining the European Union.
While the military appears to recognize that the Turkish public will not tolerate any return to the era of coups, several generals have failed to hide their disdain for the ruling AK Party's leaders.
But Özel has avoided being drawn in to politics.
According to media reports, Özel did not join General Koşaner and the head of the ground forces in visiting officers jailed in the "Sledgehammer" investigation on February 20.
"There has now been a mass resignation but he didn't take part, because he is his own man," said military expert Namik Cinar, who studied with Özel at military school.
"He will not be the government's man either. He is a man of duty," Cinar was quoted as saying.
According to the General Staff website, Özel, born in 1950, was previously commander of Turkey's Aegean Army from 2007-2008 and head of the 2nd Army from 2008-2010, before becoming gendarmerie commander in August 2010.