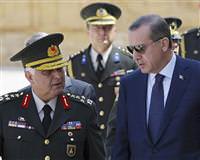 The government is planning two new ‘revolutionary’ adjustments to their relationship with the Turkish Armed Forces.


1. NO POLITICAL ANNOUNCEMENTS
The April 27th e-memorandum will be removed from the Turkish Armed Forces website. Parallel to this development, the TAF will no longer announce viewpoints on political issues on their official website. From here on out, the Chief of General Staff will relay his personal views to the Prime Minister during their weekly meeting.
2. NEW ORDER FOR OFFICIAL CEREMONIES
The August 30th official holiday tradition of the Prime Minister and the Speaker of the Assembly being greeted by a standing Chief of General Staff will be no longer. From here on out, the Prime Minister will receive holiday greetings alongside Chief of General Staff Özel.
After Erdoğan's sole chairing of the Supreme Military Council which commenced on Monday, now the August 30th greeting protocol as well as the military's relationship with the media is expected to change. In addition, any sort of political message or e-memorandum published on the General Staff website will be removed.
There are two more steps anticipated to be made towards the normalization process initiated by Prime Minister Tayyip Erdoğan, who has recently become the sole chair of the Supreme Military Council (YAŞ). According to speculation, the August 30th Victory Day ceremony held at the General Staff headquarters may undergo a format change. The second item discussed by lobbies is connected to the expected change to be brought on the General Staff's Communication Strategy.
August 30th, otherwise known as Victory Day is celebrated each year in honor of Turkey's Armed Forces. According to state custom, this holiday is considered one in which the military is celebrated. Therefore, the General Staff is in charge of coordinating celebrations for the official August 30th holiday. The day's celebrations begin with high-state officials arriving to the Honorary Hall in the General Staff Headquarters. Later, an official parade ceremony is held at the Hippodrome in the capital.
According to the changes made last year to the Regulations of Ceremonies for National and Official Holidays, when the Speaker of the Parliament or the Prime Minister is present at a holiday greeting ceremony they will be situated up front and the image of them standing alongside ministers while the Chief of General Staff makes an announcement will be no more. The most striking element of this procedural change is the fact that it begins on this August 30th's Victory Day.
The second item discussed in lobbies deals with anticipated changes to the General Staff Communication Strategy. Accordingly, the military will no longer release announcements that do not directly pertain to their line of duty. Within this framework, the archives listed on the General Staff official website may also be revised. Published items such as the April 27th e-memorandum and other similar announcements may be removed from the website. The General Staff will relay their views to Prime Minister Erdoğan, who has initiated weekly meetings. Press announcements made by the General Staff will no longer transpire periodically, something Erdoğan has previously expressed sensitivity to, but will now only be held in situations deemed absolutely necessary. Attention will be paid to ensure that handing over ceremonies of the command echelon will not be transformed into a platform for delivering political messages.
During farewell speeches, generals will only address the achievements they have made during their service as well as the projects they hope to be completed by those who follow them.