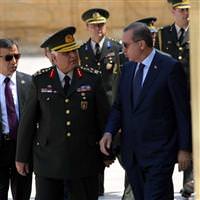 Turkey selected four new generals to lead its armed forces on Thursday in a shake-up after four top generals quit last week in protest at the jailing of officers in coup conspiracy cases.

General Necdet Ozel, previously head of the paramilitary gendarmerie, was
named as new chief of general staff for the second largest armed forces in
NATO.
from a banned Islamist party more than a decade ago.
President Abdullah Gul approved the appointment of new chiefs for the
country's ground forces, navy and air force, presidential spokesman Ahmet Sever
told reporters after the conclusion of a four-day meeting of the Supreme
Military Council (YAS).
He added that the Chief of General Staff had also been agreed upon, and it
now required a cabinet decision to rubber-stamp the appointment.
Only nine out of the usual 14 top generals attended this YAS, which convenes
twice yearly.
Alongside the four commanders who walked out last week, a fifth general
missing from the council was one of some 250 officers now jailed on charges
linked to various anti-government plots dating back to 2003.
Presidential spokesman Sezer also said a decision was taken at the YAS to
extend by one year the duties of 14 generals currently jailed as part of the
conspiracy investigations.
There had been speculation that they would be forced into retirement ,
Last Update: Aug 16, 2011 1:50 am
RELATED TOPICS