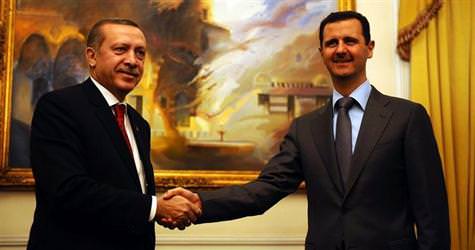 Sunday, one of Assad's advisers warned Davutoğlu would be given short shrift after Turkish Prime Minister Tayyip Erdoğan said his minister would deliver a "decisive message," having seen past entreaties to halt the violence ignored.
A Turkish official said Davutoğlu would repeat the earlier calls. But the official did not want to venture into what Turkey will do if its words continue to fall on deaf ears in neighbouring Syria.
Still, if Davutoğlu returns empty-handed, Erdoğan faces the prospect of ditching a friendship he has carefully nurtured over the past decade, leaving Assad more isolated and dependent on Iranian support than ever.
Bahadir Dincer, Middle East expert at the International Strategic Research Organisation in Ankara, said he expected no change from the Syrian government given the comments from Damascus ahead of Davutoğlu's visit.
"Turkey will have to seriously consider its ties with Syria," Dincer said. "It has been a white page for a decade now, The recent tension turned it grey, and we'll see tomorrow if the relations are entering a red-page era."
Having almost gone to war in the late 1990s over Syria harbouring Kurdish militants, the friendship became a virtual poster-child for Erdoğan's foreign policy of "zero problems with neighbours."
Erdoğan has holidayed with Assad, their cabinets have held joint meetings, Turkey has become Syria's biggest trading partner, the neighbours have visa-free travel between them, and Turkey tried to broker a peace deal between Syria and Israel.
NO GOING OUT ON A LIMB
The relationship with Syria has withered as Erdoğan tried to encourage Assad, in vain, to make democratic reforms and end the repressive one-party rule of his Baath movement.
Events in the Arab Spring of popular protests, according to Sinan Ulgen in a paper published by the Carnegie Endowment for International Peace, have shown Ankara now wants to be on the right side of history and is ready to stand up for issues like human rights even where it imperils ties with incumbent leaders.
The patience Erdoğan has shown so far with Assad stands in contrast to the speed with which he advised Hosni Mubarak to quit as president of Egypt when street protests erupted there early this year, but that patience appears to have run out.
There is genuine outrage in Turkey, a largely secular Muslim country like Syria but also a multi-party democracy, over the brutal repression unleashed since pro-democracy demonstrations erupted in the neighbouring Arab state last March.
In June, after more than 10,000 Syrians fled to Turkey to escape attacks by security forces, Erdoğan described the killing of Syrian civilians as acts of savagery.
Yet, his government -- like Syria's Arab neighbours, however upset they have become about Assad's behaviour, underlined by the recall of several Gulf ambassadors Monday -- is unlikely to take any unilateral action against Damascus, according to analysts of Turkish foreign policy in the Middle East.
With the international community divided over what to do about Syria, Turkey is unlikely to go out on a limb, either through economic sanctions or military action.
One big investment that could be vulnerable to a freeze in bilateral relations is a joint multi-billion-dollar dam project dubbed "Friendship Dam," whose groundbreaking was attended by leaders of the two countries in February.
Turkey is also likely to resist any pressure to create a buffer zone inside Syrian territory, though it is reportedly a scenario that the Turkish military has made contingencies for.
Analysts said Turkey should avoid being drawn into any military intervention in Syria just to please Western powers, as it would backfire on efforts to end ethnic Kurds' long-running insurgency in southeast Turkey.
"Turkey may limit its trade and diplomatic ties with Syria. But, even if Turkey doesn't take such steps, its clear message and attitude towards the Syrian administration will be a boost of morale to protesters," Dincer said.
Syrians living in exile have flocked to Turkey, without any apparent encouragement from the Turkish government, for a series of meetings aimed at uniting opposition to Assad.
Any move by Turkish officials to engage the Syrian opposition would further alienate Damascus from Ankara.
Assad and the ruling clique in the Ba'athist Party hail from Syria's minority Alawite community, a sect close to Iran's dominant Shi'ites, while the majority of Syrians are Sunni.
Mostly Sunni Saudi Arabia sent troops to Bahrain in March to help stifle unrest among the emirate's Shi'ite majority.
While most of Turkey's population are also Sunni, it also has a small Alawite minority, and Erdoğan's government has steadfastly sought to avoid stirring sectarian issues.
Last Friday, Davutoğlu said it was too soon to talk about asking the Syrian ambassador to Ankara to leave.