Turkey: will watch Syria after call to end violence 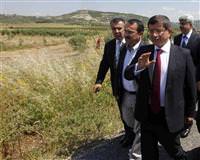 Turkey has demanded the Syrian government act to stop the killing of civilians and will be watching developments there in the days ahead, its foreign minister said on Tuesday after returning from talks in Damascus.

"Developments in the coming days will be critical, for both Syria and Turkey," Ahmet Davutoğlu told a news conference in Ankara. "Turkey's main and first aim is for the bloodshed to be stopped, and (for) an end to civilian deaths."
Davutoğlu said he had clearly stated Turkey's expectations in talks with Syrian President Bashar al-Assad, and described the 3-1/2 hour meeting as friendly, open and specific. He said he had first held 3 hours of talks with other Syrian officials.
The minister said he had conveyed a written message from Turkish President Abdullah Gül and an oral message from Prime Minister Tayyip Erdoğan to Assad.
Turkish leaders have repeatedly urged Assad to halt the violence and make urgent reforms after popular protests against his autocratic 11-year rule erupted five months ago.
"We hope that those steps that will stop the bloodshed will be taken," he said.
Assad had spoken of militants seeking to destabilize Syria, Davutoğlu said, adding that he advised the Syrian leader of the need to distinguish between terrorists and civilians in fighting terrorism.
More than 1,600 people have been killed in Syria since the unrest began, according to unofficial estimates.
Turkish outrage reached a new pitch last week after Assad's security forces launched an assault at the start or the Muslim fasting month of Ramadan on the central city of Hama.
President Gül said he was horrified by the use of heavy armor in the attack, while Deputy Prime Minister Bülent Arınç said a government that sanctioned attacks on its own people could not be called a friend.
CRITICAL DAYS AHEAD
Asked whether he was hopeful Damascus would heed Turkey's advice this time, Davutoğlu said: "The shape of the process will be more clear in the coming days not in the coming months. Days and weeks are important now."
Turkey has advised Assad to enact reforms that will pave the way for Syria to move to a multi-party political system.
"We hope for a peaceful transition process which will end in the Syrian people determining their own future," Davutoğlu said.
Ankara has nurtured strong relations with Damascus over the past decade after almost going to war in the late 1990s over Syria harboring Kurdish separatist militants.
Davutoğlu said Turkey remained committed to building a common future with Syria and would maintain contacts with all parts of Syrian society.
"We have a unity of fate with Syria and we will continue this. We will continue our contacts, we will continue our contacts with all the parties from Syria," Davutoğlu said.
Syrian dissidents living in exile have held a series of meetings in Turkey in an effort to unite opposition against Assad, though the Turkish government has not been involved in those meetings.