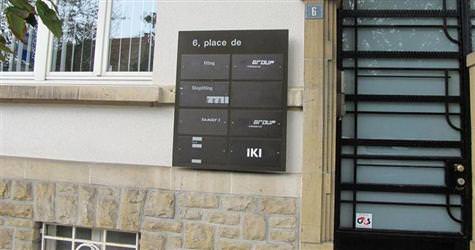 For the first time ever, SABAH has now located the Luxembourg based headquarters of the choice financial company for firms laundering funds to the PKK. The shadow corporation, known as C.I.L. would launder drug profits and then fund weapons and mines headed for Kandil. The company practically acts as the terrorist organization’s ‘cover bank’.

SABAH is the first in the Turkish press to locate the headquarters of the financial company set up in Luxembourg that provides special liberties to capital owners who launder dirty money according to the PKK's special set of rules.
The C.I.L. cover company collects drug money from the organization's advocates in Europe and then uses it to fund weapons and mines that are brought into Kandil. The company, which also launders funds to Roj TV, has become the center where the distribution of the PKK terrorist organization's funds is conducted.

SABAH TRACKS THEM DOWN
SABAH's Private Intelligence Department closely tracked C.I.L. and the companies it is connected with for one month in five different European countries; Germany, France, Belgium, Holland and Luxembourg. Documents regarding the front company C.I.L.'s partnership and capital structure have been handed over to French officials. The company, whose full name is Construction Immobiliere Luxembourgeoise, supposedly deals in construction and real estate, and operates from the address on 6, Place de Nancy, L-2212 Luxemburg.

It was Turkey's National Intelligence Agency, MİT, which found the trail first. Researching the source of funds that came into Kandil, MİT then relayed all of the information they had acquired on the PKK terrorist organization's financial support through international weapons trade to French officials.

COMPANY HAS SIX PARTNERS
French judicial authorities tracked the organization's financial traffic and has detected names in connection to international weapons companies. The phone calls made by the leaders of the organization's Europe wing were tracked for six months by French police in 2010. French investigating judge Thierry Fragnoli, the man responsible for opening the case against the PKK, tracked the money laundered into the organization to the C.I.L. Company in Luxembourg. Fragnoli's findings showed that the company consists of a total of six partners. The company has 1.5 million Euros in equity capital. However the French police are currently assessing whether the C.I.L. Company is responsible for transferring a total of 300 million Euro during the year of 2010.

COMPANIES CHANGE HANDS
According to the information obtained, the company's partners and the organization's European financiers are Mehmet Çetindağ, Mustafa Yıldırım, Abdulbaki Gökalp and Hacı Karakoyun. Each, with 300,000 Euros in capital, are partners to the company. Yıldırım was once the chair of KARSAZ, the International Kurdish Employers Union, which was the former association managing the PKK's finances. The chairman of C.I.L. is Mehmet Çetindağ. Mustafa Yıldırım is the general secretary while Abdulbaki Gökalp is the accountant.

SABAH has shown images of Çetindağ in his villa nearby Paris. Our crew has also managed to capture footage of Gökalp. Retried former General Chief of Staff İlker Başbuğ has previously stated, "The most significant strength the PKK's European wing has is economic. If the funds are cut off the armed wing will face difficulties."
THE COMPANY ALSO HAS FOREIGN PARTNERS
The front company set up by the PKK's European wing leaders also has a number of foreign partners. The organization's very own cash register, the C.I.L. firm has two foreign partners, Claudi Buffa and Henri Jean Marie Bovy. It is claimed that the foreign partners were added to the 'staff' in order to mask the company's activities. The PKK terrorist organization has used foreign nationals in previously set up shadow companies for the very same reason.
A change in strategy
The reason why the organization is using the Luxembourg-based C.I.L. is due to the fact that the PKK has suffered heavy blows in operations conducted in France, Holland and Belgium. In Belgium, PKK members had their assets seized. In the latest operations in France, a number of cars, homes and businesses were confiscated. It was then, from the 2007 period in which Nedim Seven was arrested, when the terrorist organization changed their strategy of financing. All of the money was transferred to the Luxembourg-based C.I.L. Company coupled by the selling of all real estate in France to the firm. With this company, the organization's European wing is able to continue all financial affairs, to obstruct a halt to the money laundering traffic, and to transfer funds to weapons companies, all vitally important functions for the PKK's Kandil wing. The revenue brought in from companies is known to be organized more so by the PKK's European wing Sabri Ok, known for his close affiliation to Abdullah Öcalan.