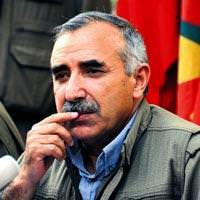 On Sunday, a senior Iranian member of parliament said that Iranian forces had captured a high-level member of the PKK terrorist organization.

"Our country's intelligence forces have carried out an important task and have arrested the second (highest) person in the PKK," Alaedin Boroujerdi, head of parliament's foreign affairs committee, stated.
Speculation had surfaced that the PKK's 'number two' was none other than Murat Karayilan, the PKK's field commander and deputy to jailed PKK chief Abdullah Ocalan.
Roj TV, known for its affiliation with the PKK ran prerecorded footage of Karayilan.
On Saturday, TRT broadcasted the news based on Iranian sources however despite the excitement surrounding the news; the story had not been verified. Boroujerdi's statement on Sunday only ignited further excitement; however it was later revealed that the person he had referred to as the "number two" was indeed someone else.