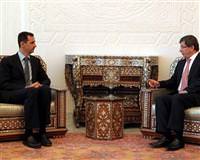 Syrian leader Bashar al-Assad’s attack from the sea on civilians in the port city of Latakia may have been the last straw. Ankara is getting ready to discuss Assad’s loss of legitimacy. Priority will be given to political sanctions.

The ongoing operations in Latakia and Deir al-Zor have made the cup boil over. Stating, "we are reaching the end of our patience", Prime Minister Tayyip Erdoğan, had already previously sent a message to Bashar al-Assad via Foreign Affairs Minister Ahmet Davutoğlu. However with the continuation of attacks on civilians, Ankara is now preparing to open the issue of Syria's legitimacy up for discussion. Prime Minister Erdoğan postponed yesterday's AK Party Central Executive Board, or MYK, meeting to meet with ministers to discuss Syria and the recent allegations of Karayılan's arrest.

Prime Minister Tayyip Erdoğan is expected to announce either today or tomorrow that Assad's legitimacy is over. Signals of this critical decision were evident in an address by Davutoğlu in Eskişehir the day before yesterday: "We are calling on the Syrian administration to stop escalating this tension. The necessary steps must be taken urgently and most of all an end must be brought to operations that lead to these numbers of civilian losses during the month of Ramadan. We may make more widespread comments on this issue tomorrow." After Davutoğlu's trip to Damascus, the Syrian state withdrew their tanks from Hama and even opened the doors for Turkish journalists. However, the steps Assad has taken since Friday have only worked to anger Ankara even more. Davutoğlu reacted to the ongoing operations by stating, "There is no excuse for these actions." Yesterday, despite not being a member of the Central Executive Board, Davutoğlu paid a visit to the AK Party headquarters to brief Prime Minister Erdoğan on the latest developments.
While speculation abounds that the United States may soon announce they no longer recognize Assad, coupled by Thursday's UN Security Council, Ankara is preparing to make a critical decision.

CONCERNS OF CIVIL WAR
One of Turkey's biggest concerns is for the situation to evolve into civil war in Syria. Believing that this would only lead to further deaths, for Ankara political sanctions are therefore a priority. Even if rejecting Assad's legitimacy is one way of handling the situation, Ankara has yet to make a final decision as to when the final political tie will be broken.
Economic sanctions on the other hand, will only be implemented should a decision be reached at the U.N. Security Council. Turkey had suffered greatly when economic sanctions were issued for Iraq and therefore favors exerting international pressure in a way to persuade the Assad administration to stop. The Syria issue will be the main item on the agenda at this Thursday's National Security Council meeting.