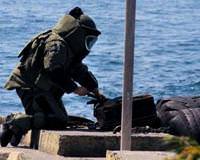 A suitcase left on the Beşiktaş Motor Port resulted in widespread panic and intervention by the bomb squad.

Police teams were suspicious of the package and well aware that the PKK could be responsible for attacks yesterday, an anniversary date of sorts for when the PKK terrorist organization staged their first attack on August 15th, 1984.
The bomb squad was called in and as the tension escalated, forced open the suitcase which turned out to contain clothes. Breathing in a combined sigh of relief, police teams lifted up the security barricades that had been set up in panic and life in Beşiktaş was returned to normal.