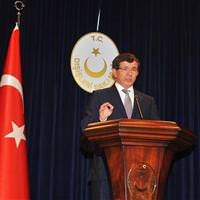 "This is our final word to the Syrian authorities, our first expectation is that these operations stop immediately and unconditionally," Davutoğlu told a news conference.
"If these operations do not stop there will be nothing left to say about the steps that would be taken," he said, without elaborating.
"We have been in contact and have repeated our demands and have emphasized our expectations." Davutoğlu said operations against civilians had intensified since Thursday evening. "In the context of human rights this cannot be seen as a domestic issue," he told reporters, without taking questions or making clear whether he spoke directly to Assad.
Turkish leaders, who once backed Assad but have repeatedly urged him to end violence and make reforms after street protests against his 11 years in power erupted five months ago, are sounding increasingly frustrated at Damascus. Turkey, a Muslim NATO member that has applied to join the European Union, is one of the few countries in the world that has open communication lines with Damascus.
Davutoğlu visited Damascus last week and held talks with Assad. Turkish Prime Minister Tayyip Erdoğan, who spoke last week with U.S. President Barack Obama about violence in Syria, said he hoped Syria would take steps towards reform within 10-15 days. However the bloodshed has continued. The Syrian navy shelled two densely populated residential districts of the main Mediterranean port city of Latakia on Sunday, residents and rights campaigners said.