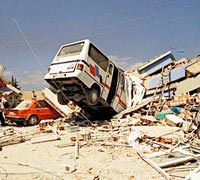 Today marks the 12th anniversary of the Marmara earthquake, which killed 18,373 people. Those who survived have not forgotten…

Today is August 17th, the 12th anniversary of what is considered to be Turkey's disaster of the century. In just 45 seconds, the destiny of the region as reshaped, tens of thousands lost their lives and hundreds of thousands were left injured and homeless.
Last Update: Aug 17, 2011 5:49 pm
RELATED TOPICS