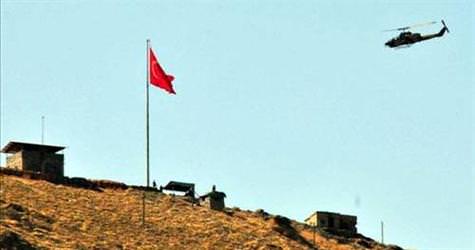 Turkish warplanes attacked PKK targets in northern Iraq on Wednesday, military sources said, in apparent retaliation for a terrorist attack in southeast Turkey which killed a dozen soldiers earlier in the day.

The planes took off from a base in the southeastern city of Diyarbakir and struck targets in the mountainous Kandil and Zap areas of Iraq where the PKK operates a number of bases, the sources said.
They said the targets included anti-aircraft defences and rebel shelters in the region, where several thousand PKK terrorists are based and from where they launch attacks on Turkey.
The Turkish military has carried out similar air attacks on PKK hideouts there in recent years.
"Different areas along the border have been bombed by Turkish aircraft on the pretext that there are camps from the PKK," said Ahmed Qadir, a local government representative in the hamlet of Sedaka, near the Turkish-Iranian border in Iraq's semi-autonomous Kurdish region.
"These places have no population because most people left a month ago after they were bombarded by Iranian artillery. Even shepherds have stopped going to these places," he said.
Turkey and Iran have often skirmished with terrorists in that region. Last month Iranian shelling of the area forced hundreds to flee their homes during clashes with the PJAK, an Iranian offshoot of the PKK.
The latest operation came hours after reports of an attack by PKK terrorists on a military convoy in southeastern Turkey.
Eleven solders and a member of the state-backed village guard militia were killed in the ambush in Hakkari province's Çukurca district near the Iraqi border, Turkish media reported.
The PKK did not immediately claim responsibility.
Prime Minister Tayyip Erdoğan condemned the killings, saying those who carried out such attacks would "pay the price."
"Our patience has finally run out. Those who do not distance themselves from terrorism will pay the price," Erdoğan told reporters on the sidelines of a conference in Istanbul.
NEW ANTI-PKK OFFENSIVE
President Abdullah Gül said the cost of carrying out such raids against the Turkish state would be "very big."
Recent Turkish media reports have said Erdoğan plans to launch a new offensive against the PKK in southeastern Turkey after the end of the Muslim fasting month of Ramadan.


In July, terrorists killed 13 troops, the highest death toll for Turkish troops in an attack since the PKK ended a cease-fire in February.

The air raid was carried out on the eve of a meeting of the National Security Council, which meets once every two months and which was expected to discuss the recent upsurge in terrorist violence.