Erdoğan in Somalia to draw attention to famine 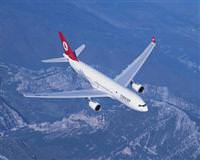 Prime Minister Tayyip Erdoğan arrived in Somalia on Friday where he plans to visit relief camps and hospitals to draw international attention to the East African country's drought and famine situation.

Erdoğan was accompanied by a number of significant figures from the political, business and entertainment world. Also on the plane was the AK Party Group Chairman Mustafa Elitaş, Turkey's Union of Chambers and Commodity Exchanges or TOBB Chairman Rifat Hisarcıklıoğlu, Doğan Holding Chairman of the Executive Board Arzuhan Doğan Yalçındağ, Istanbul Chamber of Commerce Chairman Nevzat Yalçıntaş, musicians Ajda Pekkan, Sertap Erener, Muazzez Ersoy, Nihat Doğan, journalists and a security team as well as a number of members of parliament.
Upon the arrival of the plane carrying Erdoğan and those accompanying him to Somalia, the wing scraped the ground when landing in Mogadishu. Due to the runway being extremely short, the THY plane had to land on the runway from over the ocean and ended up clipping the right wing against the ground. After what could have been a dangerous situation, the right wing was evidently damaged. Officials say that the committee may not be able to return on the same plane, and another plane might be flown out for their departure.
Meanwhile, earlier this week, Turkey held a summit of the Organization of the Islamic Cooperation (OIC) countries, which pledged $350 million in aid to fight famine in anarchic Horn of Africa nation.