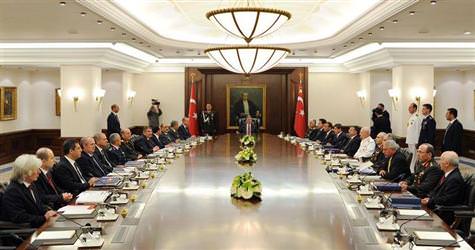 Turkey launched a second night of air strikes on PKK targets in northern Iraq late on Thursday, as Ankara responded to a surge in activity by terrorists with its first military operation in the region for more than a year.

The terrorists use the mountainous region as a sanctuary from which to launch attacks in southeast Turkey.

A Reuters witness earlier said at least 12 warplanes had taken off late on Thursday from an air base in Diyarbakir, in southeastern Turkey.

The latest raids followed an air and artillery assault on PKK targets overnight on Wednesday that was Ankara's response to a surge in terrorist activities in recent months and an ambush on Wednesday that killed nine servicemen.

Terrorists fired rocket launchers and rifles in an onslaught on a paramilitary gendarmerie post in Eruh, killing two officers and wounding four soldiers.

In the nearby district of Pervari, terrorists also wounded four civilians during similar attacks on security installations.

The Turkish General Staff was yet to make a statement on Thursday night's operation.

It said on Wednesday night that artillery hit 168 targets in the region before warplanes pounded 60 positions in two waves. Camps housing the PKK's commanders were among those targeted, security sources said.

"Our patience has finally run out. Those who do not distance themselves from terrorism will pay the price," Turkish Prime Minister Tayyip Erdogan said on Wednesday. He visited the home of a soldier killed in this week's ambush on Thursday.

Erdogan's comments and subsequent major air operation indicate a return to a hardline stance in the 27-year-old fight against the terrorists and an end to clandestine talks between the state and jailed PKK leader Abdullah Ocalan.

After a clear victory in June's parliamentary election, Erdogan vowed to press ahead with reforms addressing the 12-million-strong Kurdish minority's grievances. A wave of PKK attacks has brought an abrupt change of tone and heightened prospects of intensified conflict.

As well as continuing the air assaults, the armed forces may launch a ground incursion against the terrorists in northern Iraq, as they have in the past. Further legal action also could be taken against Kurdish politicians, currently boycotting parliament and accused of close links to the PKK.

Turkey's National Security Council, chaired by President Abdullah Gul, issued a written statement after a regular meeting on Thursday, saying it would adopt a "more effective and decisive fight in the fight against terrorism," local media reported. It did not elaborate on what those measures would be.

The military operations were apparent retaliation for a PKK attack on a military convoy at Cukurca in southeast Turkey's Hakkari province on Wednesday. Eight soldiers and one member of the state-backed village guard militia were killed.

Last month, the PKK's Ocalan sent word through his lawyers that he had agreed with Turkish officials to set up a "peace council" aimed at ending the conflict. But the mood turned sour after the PKK subsequently killed 13 troops in the biggest attack since the PKK ended a ceasefire in February.

State talks with Ocalan ended in late July and since then his lawyers have been unable to visit him in his island prison near Istanbul. This week a court banned four lawyers from representing him for a year.

The PKK is designated a terrorist group by Turkey, the United States and the European Union.