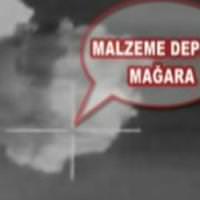 The Turkish raids, the first against terrorists holed up in the mountains of northern Iraq in more than a year, mark a stark escalation of the 27-year-old conflict after the collapse of efforts toward a negotiated settlement.

In a statement on its website, Turkey's General Staff said fighter planes had hit 20 rebel targets in Qandil mountain, Sinath-Haftanin, Hakurk and Gara in northern Iraq, adding the planes had all returned to their bases.

"In coordination with the air operation, intense artillery fire was directed at 85 targets in Zap, Avasin-Basyan and Hakurk," it said in the statement.

The General Staff said reconnaissance flights were continuing in the area to assess the damage inflicted during the operations and to determine whether there were any casualties.

Late on Friday, a Reuters witness said at least 10 war planes had taken off from an air base in southeastern Turkey.

The strikes follow a surge in attacks by PKK terrorists against the Turkish military and an ambush on Wednesday that killed nine servicemen.

Some 40 Turkish security personnel have been killed in clashes in the last month and further air action was likely for as long as fighting on the ground continues.

It was not clear whether the air assaults might be a prelude to an incursion by land forces, which Turkey has sent into northern Iraq in the past to tackle PKK terrorists.