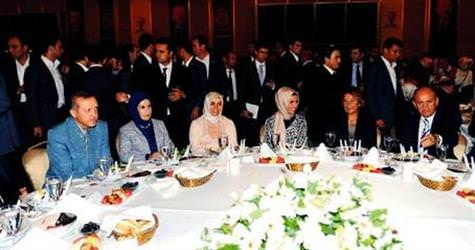 In regards to the recent cross-border operations staged against PKK targets, Prime Minister Erdoğan states, “We have chosen this path to ensure peace for our citizens. We will do all that is necessary.”As for the BDP, or the Peace and Democracy Party, Erdoğan reminds that the sole address for politics is the assembly.

Prime Minister Recep Tayyip Erdoğan states, "Nobody can tell us to stop the state's operations. The state is obliged to stage these operations in order to establish peace in this nation, and doing so is its most natural right." Erdoğan delivered the message to BDP that the sole location where politics may be conducted is in Turkey's Grand National Assembly, and stated, "They will be here after October 1st."
Speaking at a fast-breaking iftar dinner, held for the AK Party's Istanbul District Headquarters at the WoW Hotel, Erdoğan discussed the recent increase in terrorist activities as well as the resulting cross-border operations. Erdoğan stated, "The fact that these painful events are transpiring during this spiritual time in which sentiments of the divine are at a peak, has undoubtedly burned our hearts. However, let me just say that this will not be our fate for long. I speak honestly when I say that we will continue our struggle to put an end to these painful incidents, the sabotage, all of this provocation, and ambushes and traps set up against democracy, without stepping away from fraternal jurisprudence, justice, fairness, democracy or the law. We have chosen this path in order to establish peace and security for all of our citizens, without exception, from Edirne to Hakkâri."
FROM QANDIL TO DOMESTIC ISSUES
Emphasizing that these operations are being staged in order to establish peace for the state and the public, Prime Minister Erdoğan stated: "Nobody should tell us that the state needs to halt these operations. No, if it takes operations to establish peace for this state and public, then we are obliged to stage operations and doing so is our most natural right. The state has no stakes here. Our government will never step back from this struggle against terrorism and violence; however at the same time we will never let history repeat itself when it comes to the methods of preventing terrorism. Those waiting for the dark days of the past to resurface are waiting in vain. Those staging ambushes against democracy will be left alone to deal with their inane accounts and aspirations. Therefore, we will go all the way to stage whatever sort of operation is needed and this is in no way directed towards our civilian public."
Prime Minister Erdoğan also delivered a series of messages in regards to the parliament boycott, by stating the following directed at the BDP: "If you do not distance yourselves from those that are unlawful and inhumane as well as from terrorism, bloodshed, murder and ambushes then you will be deceiving those citizens who voted for you and you will not be able to conduct legitimate politics. You must immediately comprehend that there is no other route except for that based in legitimacy. If you are going to come and conduct politics, then there is just one place in which to do so; Turkey's Grand National Assembly. Look, others have said the same thing. 'We will not come until our comrades do.' What happened, did they come or did they come? In Simav I said they would come in the end and within a week they did. These people will also come. They have no other choice. They may be deliberating because the parliament is closed. However, the situation is this; they will show up after October 1st. There is no other way out of this. You know what we have to say to those running from the grounds of legitimacy? It's up to you."