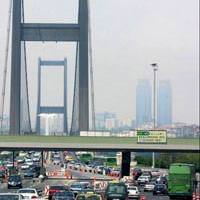 The Council of Ministers has designated this year’s Ramadan Holiday as officially lasting for nine days.

Deputy Prime Minister Bülent Arınç announced following yesterday's Council of Ministers meeting that Monday, August 29th would be a half day for public servants, while Friday September 2nd would be considered a full off day.
Noting that they have fulfilled all expectations regarding this year's Ramadan holiday, Arınç states that all toll roads and bridge crossings will be completely free of charge between Saturday, August 27th and Sunday, September 4th.
Monthly stipends for the retired, widowed or orphaned will be released on August 23rd-26th, while elderly pensions will be paid out on August 26th -28th with unemployment wages also to be released prior to the official holiday.