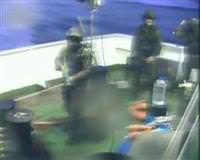 The handover of a long-postponed U.N. inquiry report on an Israeli raid on a Gaza-bound ship in 2010 that killed nine Turks has been delayed again, a U.N. spokesman said on Monday.

The U.N. announcement came as Israel and Turkey traded blame for the delay in the delivery of the final report to the office of U.N. Secretary-General Ban Ki-moon.

"At this stage, the report is not complete," U.N. spokesman Farhan Haq told reporters in New York.

"The secretary-general does hope that the members of the panel will be able to work on coming to a consensus," he said.

The so-called Palmer report has been delayed repeatedly to allow for Israeli-Turkish rapprochement talks. Washington has been concerned at the rift between two countries that had been strategic partners in an increasingly stormy Middle East.

U.N. officials originally suggested the report by a four-man inquiry panel could be finalized in February, then April, July and, most recently mid-to-late August.

Diplomats had said the report would be handed over to Ban's office as early as Monday. Haq said it was not clear when the report on the findings of a U.N. inquiry into the seizure of the Mavi Marmara last year would be received.

"We've been saying late August and that's still roughly what we're looking at," he said.

Once the report is delivered to Ban's office, it is unclear whether it will be made available to the public. U.N. officials say Ban will decide after reading it whether to release it in full, issue a redacted version or not publish it all all.

Haq also declined to say what the reason for the delay was, adding that assigning blame would not likely help the parties reach a consensus.

Turkey's Foreign Ministry spokesman Selcuk Unal stated, "The delay request, as in the other cases, came from the Israeli side."

"Contrary to media reports on discussions with the Turks ... Netanyahu has not changed his position -- namely that Israel will not apologize -- and the request to postpone publication of the Palmer report came from the Turks," the statement said.

Turkey has been demanding that Israel apologize for the raid, but the Israeli government has made clear it will not issue a formal apology.

Netanyahu has voiced regret over the killings, and Defense Minister Ehud Barak, a centrist in the conservative coalition government, has stirred debate inside the Cabinet by proposing Israel offer a diluted apology in hope of restoring ties with Turkey, once an important Muslim ally.

Barak had also thought such a step would help indemnify Israel's navy personnel against lawsuits abroad.

Israel calls its Gaza blockade a precaution against arms reaching Hamas and other Palestinian guerrillas by sea. Palestinians and their supporters say the blockade is illegal collective punishment, a view some U.N. officials have echoed.