Kadıköy offers quality, while the islands are serene 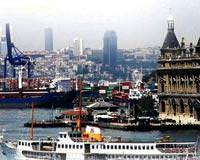 According to a survey released by İTO, Kadıköy comes in first in terms of district offering the best quality of life in Istanbul. Princes’ Islands residents are the most satisfied with where they live, while Esenler is the highest stress-felt district.

A survey on 'Quality of Life in Istanbul' conducted by Istanbul University Lecturer Prof. Murat Şeker and published by the Istanbul Chamber of Commerce, or İTO, reveals surprising information regarding Istanbul's 39 districts. For the survey, 2,410 participants over the age of 18 were questioned face to face on their satisfaction city-wise, expectations and on their quality of life. According to the research, Istanbul's three most significant problems are traffic, population and safety…
According to the results, out of 39 districts, Kadıköy was selected as offering the highest quality of life. Kadıköy was followed by Beşiktaş, Beyoğlu and Şişli. In terms of quality of life, the Esenler district came in last. Istanbullites' satisfaction with municipal services registered at 5.82 out of ten. In general, the satisfaction of life level registered at 6.02 out of ten.
THE MOST STRESSFUL DISTRICT
While residents from Sultanbeyli, Kâğıthane, Kartal and Pendik claim their jobs are very stressful and difficult, those who are most content with their line of work reside in Çatalca, Şile and the Princes' Islands. Those with the highest satisfaction level in regards to their wages, tend to live in Ataşehir, Şile, Çatalca, Zeytinburnu and Beşiktaş, whereas the top three districts with residents that have the lowest level of satisfaction are Sultanbeyli, Arnavutköy and Sancaktepe. Şile was selected as the top district where residents feel safest at home, rated at 8.71 and followed by the Princes' Islands at 8.56.
While Bayrampaşa at 5.5 percent was selected as being the district where residents felt the least safest at home, Bağcılar and Güngören followed. In terms of the most safe when walking home alone, Büyükçekmece took the top spot at 7.78 percent, followed by Silivri and Ataşehir followed. Gaziosmanpaşa, Esenler, Bağcılar and Bayrampaşa were all considered to have eerie streets at night.
ETHNIC TENSION
Out of every 100 people questioned, 33.17 percent, stated that from time to time they felt tensions due to their political ideology. Out of those questioned, 26.14 felt pressures due to their religious beliefs and actions, while 26.08 felt pressure due to traditions and customs. Residents from Bağcılar had the highest complaints of ethnic tension at 6.83 percent, followed by Güngören, Sancaktepe and Fatih. Büyükçekmece, Çatalca and Silivri came in last in this category. The districts with the highest level of religious tension are Güngören, Sancaktepe, Beşiktaş, Avcılar and Esenler. In terms of residents' satisfaction with the districts they live in, the Princes' Islands topped the list with 9.02 percent, followed by Şile, Silivri, Büyükçekmece and Çatalca. Arnavutköy (4.62), Gaziosmanpaşa (4.98), Sultanbeyli (5.08) and Bayrampaşa (5.36) were the districts residents were least satisfied with living in.