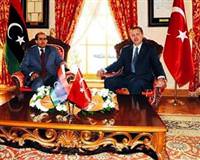 After leaving Turkey out of the first summit on Libya, this time Prime Minister Erdoğan was the one to refuse an invitation by Sarkozy for the September 1st Libya meeting.

French Prime Minister Sarkozy has changed his tune, inviting Prime Minister Erdoğan to a September 1st meeting of leaders to discuss developments in Libya. Sarkozy had refrained from inviting Erdoğan to the first meeting held in March in which the initial decision was made to stage an operation on Libya.
MINISTER TO ATTEND
Prime Minister Erdoğan however, refuses to succumb to Nicolas Sarkozy's role-seeking game and has used the upcoming Ramadan holiday as an excuse to refuse the invitation. Foreign Affairs Minister Ahmet Davutoğlu is planned to represent Turkey at the conference.
OBAMA WILL ALSO BE ABSENT
All state and government leaders from nations that are in support of the operation in Libya have been invited to the upcoming conference to be held in Paris. A number of state leaders however, including Obama and Erdoğan, are not expected to be in attendance.