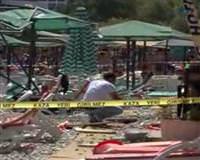 Several tourists were slightly injured in an explosion on a packed beach in the tourist resort of Kemer on Sunday.

Several tourists were slightly injured in an explosion on a packed beach in the Turkish resort of Kemer on Sunday.

The governor's office in nearby Antalya said in a statement that the cause of the small blast was as yet unclear, while Russia's Consul-General said a buried firecracker had exploded and seven Russian tourists had been injured by flying pebbles and gravel.

Antalya is one of Turkey's most popular beach resorts, attracting tens of thousands of tourists. It is particularly popular with Russian and German visitors.

A Russian diplomat in Turkey told Russia's RIA news agency that all injured tourists had now returned to their hotel after receiving medical treatment.