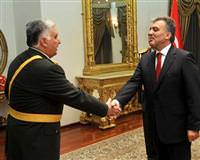 Today Turkey celebrates the start of the Ramadan Holiday as well as the nation’s Victory Day. President Gül and Prime Minister Erdoğan will first attend ceremonies in Ankara to celebrate Victory Day, a holiday held on August 30th to commemorate the final battle in the Turkish War of Independence in 1922, before moving on to Istanbul.

This year Victory Day and the first day of the religious Ramadan Holiday, or 'Eid' happen to fall on the same day, inciting dual celebrations throughout the state. Ceremonies in commemoration of the 89th anniversary of Victory Day will be held in Ankara from seven in the morning until midnight today.
A ceremony for Victory Day, which started at seven this morning, had wreaths places on the Atatürk Mausoleum at 08:30, followed by a ceremony held there at 08:45. At 09:45, a first transpired at the General Staff as President Abdullah Gül as Chief Commander, accepted congratulations alongside Chief of General Staff Necdet Özel and other armed forces commanders. At 11:00 there will be a parade held at the Ankara Cultural Center (AKM). President Abdullah Gül and Chief of Staff General Necdet Özel will be greeting the troops with a standing ovation. Meanwhile, a reception, which was to be held at the General Staff Headquarters, was cancelled in light of recent developments.
The nation's leaders plan to celebrate their Ramadan Holiday in both Istanbul and Ankara. Due to Victory Day celebrations, Abdullah Gül, Speaker of the Parliament Cemil Çiçek and Prime Minister Recep Tayyip Erdoğan will be spending the first day of the Ramadan holiday in Ankara in order to attend August 30th Victory Day celebrations. Gül, Çiçek and Erdoğan are scheduled to spend the second and third days of the Ramadan holiday in Istanbul. Meanwhile, CHP Chairman Kemal Kılıçdaroğlu will be spending the first day of his holiday in Somalia. Kılıçdaroğlu, joined by vice-chairmen Gürsel Tekin and Faruk Loğoğlu departs from Istanbul to Somalia today. After visiting the Dadaab Refugee Camp, Kılıçdaroğlu plans to return to Istanbul the following day, where he will be spending the remainder of the holiday.

GÜL: THERE IS A BRAND NEW TURKEY NOW
In a message released for Ramadan, President Gül states; "Today there is a brand new Turkey on the global stage. With its success in every area and active and constructive ventures in the international arena, Turkey has drawn the world's attention and is well on the way to becoming a leading global actor."
Gül also released a message to commemorate Victory Day. Describing this day as, "the proclamation of Anatolia as the everlasting Turkish nation" due to "the dazzling results of the unifying of the people's army", Gül states that Turkey today is a nation which preserves the stability of its economy, democracy and military while as a strong nation, continues to increase its presence in the international arena."
President Gül also emphasized that there is no power that can harm the unity and solidarity of a nation that has lived in peace on this land for a thousand years.
In Prime Minister Erdoğan's Victory Day message he states, ''This victory, which provided one of the most direct messages that our nation, whom was wanted erased from history, will instead continue to direct the course of history and will never be erased from our national memory." Erdoğan also went on to state that Turkey, with a responsibility derived from history, will continue to extend a hand with compassion to the areas of crisis in the world while continuing to act as the world's conscience.