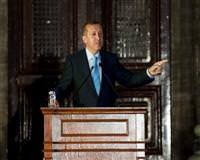 The Turkish government is to return properties belonging to religious minorities prior to 1936.

According to a decree published in Turkey's Official Gazette at the weekend, property taken away from minority religious foundations under a 1936 declaration will be returned to them.
The decision was announced ahead of a dinner to break the Ramadan fast that Prime Minister Tayyip Erdoğan attended with representatives of the Christian and Jewish communities in Istanbul on Sunday evening.
Some of the properties were hospitals, schools and cemeteries. In the case of minority groups' properties that were sold to third parties, the religious foundations will be paid the market value of the properties by the Treasury.
Most of Turkey's Christians fled in the upheaval of World War One and the ensuing War of Independence. There are now around 100,000 Christians of different denominations and some 25,000 Jews among Turkey's overwhelmingly Muslim population of 74 million.
There is a dwindling community of around 2,500 Greeks in Istanbul, capital of the Greek Orthodox Byzantine Empire until the Ottoman conquest of 1453. Some 60,000 Armenians and 15,000 Syriac Orthodox also live in Turkey, along with several other smaller religious minorities.
A treaty with Western powers in 1923 allowed Istanbul's non-Muslim communities to retain special education and property rights.