A concrete expression of transformation 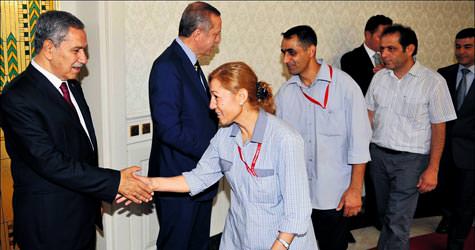 Commenting on the General Staff’s decision to remove an announcement commonly referred to by the public as the e-memorandum, which was made on the official website on April 27th, 2007, Erdoğan states, "We had expressed our desire for this to be done to prior administrations. However, for some reason they never took this step.”

Prime Minister Tayyip Erdoğan, responded to the lifting of the April 27th 'e-memorandum' from the General Staff website, by stating; "I congratulate them on doing what needed to be done."
"We had expressed our desire for this to be done by earlier administrations. However, for some reason they never took the step."
Erdoğan responded to questions from the press after attending an Eid prayer ceremony. When asked his opinion in regards to the removal of the critical e-memorandum from the Turkish Armed Forces website, Erdoğan responded: "This is very important in terms of evaluating from a democratic standpoint the transformation and change experienced by the current administration of the Turkish Armed Forces. We had requested this be done in the past, however for some reason they never took this step. The current Chief of General Staff and Turkish Armed Forces administration however has taken the step. Therefore I congratulate them for doing what needed to be done."