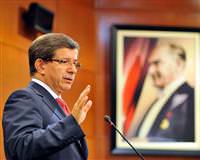 Emphasizing that the Israeli government is to blame for mutual relations reaching this point, Foreign Affairs Minister Ahmet Davutoğlu states, "As long as the Israel government refrains from taking the necessary steps, there will be no turning back from this point.'

Davutoğlu reveals the five measures the Turkish government has issued against the Israeli administration:

1) Turkey-Israel diplomatic relations have been reduced to a second secretary level with Turkey expelling Israel's ambassador and senior Israeli diplomats.
2) All military agreements were halted on Friday, and Israeli military aircraft barred from Turkish airspace. All joint military exercises have also been suspended.
3) Turkey will not recognize Israel's blockade of Gaza and will take the issue to the International Court of Justice.
4) Turkey will take measures to ensure the freedom of maritime access in the eastern Mediterranean.
5) Turkey will support all of the flotilla victims in court.
Expressing that Turkey represents an understanding of peace and not conflict, justice and not oppression, Davutoğlu states, "Therefore, we have displayed our reaction to the inhumane attacks in Gaza, just as we raised our voices against the massacres in Bosnia and Kosovo."

Pointing out that today, the Israeli government must make a preference: Davutoğlu notes:
"Those governing Israel need to see that true security is only possible with the building of true peace."

"They must also understand that the way to build true peace is not through massacring the citizens of a comrade country, it is through strengthening that camaraderie. However the current Israeli administration refrains from seeing this. They are obviously unaware of the results of the significant change which has transpired in the Middle East. I would like to especially emphasize however that the measures we are taking solely pertain to the stance of the current Israeli administration."

Stating that Turkey has clearly stated their demands and expectations regarding this issue, Davutoğlu emphasizes, "I want to underline this point once again. The Israeli government is responsible for relations reaching this point. As long as the Israeli government refrains from taking the necessary steps, there is no way relations will return to how they were."