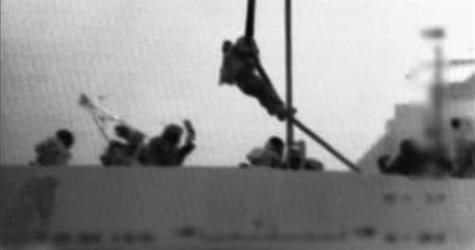 A long-awaited U.N. report on an Israeli raid on a Gaza-bound ship that killed nine Turks declares that Israel's naval blockade of the Gaza Strip was legal, but that the Jewish state used unreasonable force.

The report, made public on Thursday, said Israeli commandos faced "organized and violent resistance from a group of passengers" in the incident last year.
But in criticism of Israel, it said the amount of force used by the Israelis on board the Mavi Marmara, the largest in a flotilla of six ships that the crew said were delivering aid to Palestinians in Gaza, was "excessive and unreasonable."
In comments that considerably weakened the force of the report, the Israeli and Turkish members of the four-man panel that wrote it said they disagreed with key findings. The Turkish panelist dissociated himself from some conclusions.
Israel calls its Gaza blockade a precaution against arms reaching Hamas and other Palestinian guerrillas by sea. Palestinians and their supporters say the blockade is illegal collective punishment, a view some U.N. officials have echoed.
The report, prepared by a panel headed by former New Zealand Prime Minister Geoffrey Palmer, is expected to be formally handed to U.N. Secretary-General Ban Ki-moon on Friday and was due to be released then. But the New York Times posted on its website on Thursday a copy it had obtained.
The report's release was delayed repeatedly to allow for ultimately fruitless rapprochement talks between Israel and Turkey, whose relations were badly affected by the incident on May 31 last year.
The United States has been concerned about the rift between two countries that had been strategic partners in an increasingly stormy Middle East.
The report was originally expected to be completed in February. But Turkey and Israel were never able to agree on what happened and what the conclusions of the report should be, diplomats and U.N. officials said. As a result, one U.N. official said, the report is not a "consensus document."
Turkish Foreign Minister Ahmet Davutoğlu, speaking on the sidelines after the Paris conference on Libya, expressed regret over the report: "As long as Israel does not apologize, as long as it does not pay compensation, as long as it does not take the steps we expected regarding the blockade, our stance on this has always been clear," he said.
"Therefore, until the report is published, our statement tomorrow will focus more on those steps we expected Israel to take which it has not, rather than on the content of the report."
NO APOLOGY FROM ISRAEL
Ankara has demanded that Israel apologize for the raid, but the Israeli government has made clear it will not issue a formal apology.
The report said Israel's blockade of Hamas-run Gaza, "was imposed as a legitimate security measure in order to prevent weapons from entering Gaza by sea and its implementation complied with the requirements of international law."
The flotilla "acted recklessly" in trying to breach the blockade and there were "serious questions about the conduct, true nature and objectives" of the organizers, the 105-page document said.
But it said "Israel's decision to board the vessels with such substantial force at a great distance from the blockade zone and with no final warning immediately prior to the boarding was excessive and unreasonable."
Israeli panelist Joseph Ciechanover said in an appendix that he did not agree with that judgment since Israeli soldiers had acted in self-defense.
Turkish panelist Ozdem Sanberk, in a separate appendix, disputed that the blockade was legal or that the flotilla had acted wrongly. "I reject and dissociate myself from the relevant parts and paragraphs of the report," he wrote.
While Israel had no immediate formal comment, one senior Israeli official expressed some satisfaction. "The bottom line is that the Israeli actions were legal," he told Reuters on condition of anonymity.
It was also significant that the report confirmed Israel's right to search ships in international waters, the official said. He said he hoped Israel and Turkey could put the flotilla incident behind them and rebuild their once-strong ties.
Prime Minister Benjamin Netanyahu has voiced regret over the killings. Defense Minister Ehud Barak, a centrist in the conservative coalition government, has stirred debate inside the cabinet by proposing Israel offer a diluted apology in hope of restoring ties with Turkey, once an important Muslim ally.
Barak had also thought such a step would help indemnify Israel's navy personnel against lawsuits abroad.