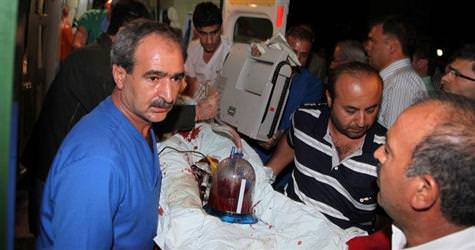 PKK terrorists opened fired on a group of Turkish policemen playing football in the eastern city of Tunceli late on Sunday, killing a senior officer and his wife, and wounding eight other police officers.

The police were playing at an artificial pitch in the city center when four or five terrorists arrived by car and opened fire with long-range rifles. One terrorist was shot dead as police returned fire.
Terrorists opened fire using long-range rifles from three different angles as police providing security for the game managed to kill one terrorist.
The attack took place at 21:40 Sunday evening as unsuspecting and unarmed police officers played a football game in a fence-enclosed football field. A police commissioner and his wife, who was watching him from the stands, were killed in the assault. Eight police officers were wounded, three of which are in serious condition.
The terrorists used a stolen car in the attack. At the same time last night as the terrorists staged a three-prong ambush, in another area of Tunceli, terrorists staged simultaneous attacks on a number of Special Forces points. After the attack, a widespread operation was initiated including Cobra helicopters seeking out the terrorists. The group consisted of four to five terrorists who are suspected to be the same assailants responsible for killing two military officers in Tunceli the day prior.
It was the third attack in two days in southeast Turkey, where two soldiers and two village guards also died in separate assaults by PKK terrorists, amid a heightened level of violence in the region.