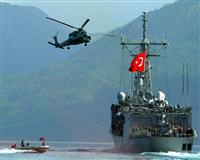 Amongst the sanctions issued against Israel, Turkey’s plans to take measures to ensure the freedom of maritime access in the eastern Mediterranean is based on the Barbaros Plan. Accordingly the Mediterranean Shield, which includes establishing security in the Eastern Mediterranean, will be broadened. Turkey will also establish a fleet presence in the Adriatic, Red Sea and Indian Ocean.

SABAH is releasing an important detail regarding the Turkish Navy's presence. Declaring their Plan B in response to Israel's attitude following the release of the Palmer report, it turns out that the decision to "take all precautionary measures to establish further presence in the Eastern Mediterranean" is actually a part of an important plan of action.

In upcoming days, Turkey will begin to display a more active presence along with maritime components in both the east and southern regions of Cyprus. Within this framework, the number of frigates, assault boats, submarines and naval station planes serving in the Mediterranean Shield Operation which provide security in the Eastern Mediterranean will also be on the incline.

The Barbaros Action Plan, which aims to display the Turkish Navy's presence in neighboring seas, now plans for Turkish maritime components to be in constant navigation not only in the Black Sea, the Aegean Sea and the Mediterranean but also in the Adriatic Sea, the Red Sea as well as the Indian Ocean.

In 2010, the first display of presence conducted by the Turkish Sea Task Group had the Turkish Navy paying visits to ports in the Aegean, the Mediterranean and the Adriatic. During that time the public of the nation's visited were allowed to come on board to see the ships. The following is a list of the Turkish Navy's activities in the Mediterranean, Aegean and Black Sea as well as the Adriatic, the Red Sea and the Indian Ocean:

MEDITERRANEAN SHIELD TO BE ACTIVATED: It turns out that there are new procedures being put into place to further activate the Mediterranean Shield which was first established by the National Security Council in 2006 in order to establish security in the region following the establishment of the Ceyhan region as a center for energy. Upon Israel's insistence on continuous postponement in regards to the apology issue, the number of frigates in the Mediterranean Shield program will be increased from two to four, the number of assault boats from three to five and the number of coast guard ships will be increased from one to three.

TURKEY'S NAVY TO DISPLAY PRESENCE: "The Turkish Sea Task Group (Türk Deniz Görev Grubu) established in order to support Turkey's foreign policy and presence in the world's seas as well as to establish security on the routes used by Turkish commercial ships has shown its presence in the Red Sea and the Indian Ocean over the past three months. Consisting of the TCG Barbaros, Gelibolu, Gemlik and Kudret Güngör frigates as well as one logistical support ship, three sea helicopters as well as SAT, SAS and Diving Teams, the Turkish Sea Task Group passed through the Suez Canal on June 2nd, 2011 and continued on to Oman, UAE, Pakistan, India, Yemen, Saudi Arabia and Jordan ports. In the past, the Turkish Sea Task Group has also visited ports in Tunisia, Algeria, Spain, Italy, Montenegro, Croatia, Bosnia Herzegovina, Albania and Egypt.

BLACK SEA SEA COOPERATION TASK GROUP (BLACKSEAFOR): Established with the collaboration of coastal states in order to protect peace and stability in the Black Sea as well as in order to increase regional cooperation. The operation, which was first initiated in 2001, has advanced in scope each year. Command is rotated between Turkey, Russia, Romania, Ukraine and Bulgaria, all contributors to the task group. Commanders from the collaborating nations last came together in Trabzon on August 19th, 2011.
BLACK SEA CONCORD OPERATION (KARADENİZ UYUMU HAREKÂTI): Put into practice on October 10th, 2005 this operation is based in Ereğli and has frigates, assault boats, submarines, helicopters, naval station planes and coast guards in service. The Naval Forces Command has begun initiatives to ensure other Black Sea coastal nations are included in the operation and has received positive results thus far.

Panic in Greece
Turkey's harsh statements regarding the Israel-supported drilling for petrol and natural gas in southern Cyprus as well as Turkey's intentions to bring out fleets into the Mediterranean has resulted in apprehension on behalf of Athens and Greek Cyprus.
Greece's Minister of Defense Panos Beglitis has stated; "No matter what the economic situation is in Greece, the nation is determined to protect its sovereign rights. Greek Government Spokesman Stefanos Stefanou used the phrase, "Turkey is threatening again." The Greek newspaper Simerini wrote that Greece was keeping their fleets ready for any possibility.
Turkey's presence in international operations
U.N. Task Force (Lebanon): Turkey continues to contribute to the U.N. Temporary Task Force set up by the U.N. Security Council on light of the conflict which erupted in 2006 between Lebanon and Israel. Up until now, six frigates, two logistical ships and two corvettes have participated off the shore of Lebanon in an effort to support the naval forces.

UNIFIED TASK FORCE (SOMALIA): Established in order to prevent pirating off of the coast of Somalia, a route regularly used by Turkish commercial ships, Turkey's Naval Forces have contributed a frigate, two AB-212 helicopters, one helicopter, an Underwater Assault Team and an Underwater Tactical Team.

LIBYA SECURITY OPERATION: Following the developments in Libya, and in accordance to decisions made by the U.N. and NATO, both Turkey's navy and air force have been assigned to provide rotating security in the Mediterranean. Accordingly, Turkey has contributed the TCG Gaziantep, TCG Gemlik, TCG Yıldırım and TCG Yavuz frigates as well as a submarine and TCG Akar logistics ship.

ACTIVE ENDEAVOR: An operation established to provide support for NATO's assets in the Mediterranean in which Turkey since 2001 has been providing logistical support from the Aksaz and Mersin Naval bases.