Erdoğan to visit Egypt next week 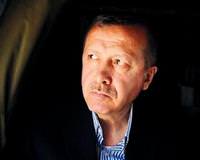 Prime Minister Tayyip Erdoğan will visit Egypt next week to discuss political coordination and economic ties, an Egyptian government official said on Tuesday, at a time of increasing regional tensions.

The trip is likely to be watched closely by Israel, whose relations with both regional heavyweights have deteriorated sharply.
Egypt, which has a peace deal with Israel, has threatened to withdraw its ambassador in a row over the border shooting of five Egyptian security personnel last month as Israeli troops repelled militants who killed eight Israelis.
Turkey had downgraded diplomatic relations with Israel because of the Jewish state's refusal to apologise for the deaths of nine Turks, killed last year when their aid boat challenged Israel's naval blockade of Gaza.
Erdoğan will travel to Egypt on Sept. 12 and leave on Sept. 14, the Egyptian prime minister's spokesman said.
"There are a few agreements that will be signed," Mohamed Higazy said, adding that the two sides would discuss political coordination and economic ties.
Erdoğan will meet the head of Egypt's ruling military council, Field Marshal Mohamed Hussein Tantawi, Prime Minister Essam Sharaf and other officials and politicians.
Some media reports had suggested Erdoğan would travel from Egypt to Gaza, which is under Israeli blockade because it is ruled by the Palestinian Islamist group Hamas, but an Egyptian official said he did not expect such a trip to take place.