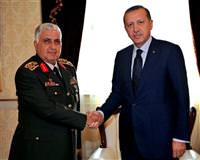 Prime Minister Tayyip Erdoğan will visit Egypt, Tunisia and Libya next week, his office said on Wednesday, a trip seen as an effort by Turkey to strengthen its role in a region convulsed by "Arab Spring" revolts.

He would be the first head of government to visit Libya since rebels fighting to end Gaddafi's 42-year-old rule, backed by NATO air strikes, entered Tripoli.
Some Turkish media had suggested Erdoğan would travel from Egypt to the Palestinian Gaza Strip, as relations between Turkey and Israel have frayed over an Israeli raid on a Turkish ship last year. But the statement from Erdoğan's office made no mention of a visit to the coastal strip.
Visiting Gaza, controlled by the militant group Hamas, would have further exacerbated tensions between the two countries.
The Sept. 12-15 trip is likely to be watched closely by Israel, whose relations with regional heavyweights Turkey and Egypt have deteriorated sharply.
Egypt, which has a peace deal with Israel, has threatened to withdraw its ambassador in a row over the border shooting of five Egyptian security personnel last month as Israeli troops repelled militants who killed eight Israelis.
Turkey has downgraded diplomatic relations with Israel because of the Jewish state's refusal to apologise for the deaths of nine Turks, killed last year when their aid boat challenged Israel's naval blockade of Gaza.
Hesitant at first to dump one-time friend Muammar Gaddafi and to back NATO operations, Turkey is taking a lead role in efforts to rebuild Libya now the Libyan leader is on the run, eyeing billion dollar deals and hoping to extend its influence in north Africa.
Turkey, a rising diplomatic and political power in the Middle East and in North Africa, had close political ties with Gaddafi and Turkish companies had projects worth more than $15 billion in the oil producing nation last year.
Ankara has provided the rebel National Transitional Council, the new masters of much of Libya, with $300 million in cash, loans and other aid.