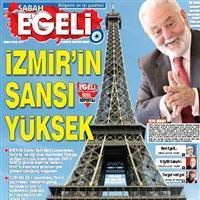 Today, Sabah newspaper has made a significant gesture by way of beginning publication of a newspaper for readers in the Aegean on the anniversary of Izmir’s independence. As of today, Sabah’s Aegean version has officially gone into publication.


Turkey's leading newspaper Sabah has added a new regional supplementary daily today, a newspaper in its own right to provide further access to its beloved readers throughout the country.
On this very day, September 9th, 2011, which is also the 89th anniversary of Izmir's independence, Sabah newspaper has begun publishing an Aegean edition entitled Egeli Sabah as a gift for readers in the region.
With a rooted history encompassing the traces of a variety of civilizations and its own indigenous mosaic of culture spanning from industry, agriculture arts to tourism with a wide ranging economic and social profile, the Aegean region offers enough news to fill a newspaper daily. Egeli Sabah plans to reflect all of the goings-on in the Aegean and will be characterized more as an independent newspaper than simply an addition. Egeli Sabah will be distributed daily along with Sabah newspaper free of charge.