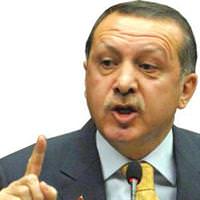 Turkish Prime Minister Tayyip Erdoğan saw "grounds for war" with Israel last year after a deadly raid on a Turkish ship headed for Gaza, according to a transcript of a recent interview.

State news agency Anatolia released late on Sunday what it said was an original Turkish-language transcript of an interview Erdoğan gave to Al Jazeera television last week. It included elements not broadcast as well as original wording for sensitive comments that had been transmitted only in Arabic translation.
Among previously unpublished elements, Erdoğan said Israel's raid in May 2010 on a Turkish ship headed for Gaza, in which nine Turks were killed, would have justified going to war.
"The attack that took place in international waters did not comply with any international law. In fact, it was grounds for war. However, befitting Turkey's greatness, we decided to act with patience," he said.
The transcript in Turkish from Anatolian, provided by Erdoğan's office, also gave the following account of the prime minister's response to a question on what Turkey would do to ensure free passage for its ships in the Mediterranean.
"Right now, without a doubt, the primary duty of Turkish navy ships is to protect its own ships," Erdoğan said.
"This is the first step. And we have humanitarian aid that we want to carry there. This humanitarian aid will not be attacked any more, as it was the case with Mavi Marmara."
Turkey downgraded diplomatic ties with Israel and halted defense-related trade after the Jewish state confirmed last week that it would not apologies for the raid on the Mavi Marmara.
Turkey and Israel had tried to mend fences before the publication two weeks ago of a U.N. report that deemed the blockade of the Hamas-ruled Gaza Strip a legal means to stem the flow of arms to Palestinians but also said Israel had used unreasonable force.
Israel has said it will maintain the blockade and that it wants to ease tensions with its former ally.
"We have no interest in deteriorating the relations with Turkey and we worry that this attitude will encourage the terror groups. Therefore we call on Prime Minister Erdoğan to change course," Israeli Vice Prime Minister Moshe Yaalon told a counter-terrorism conference near Tel Aviv on Monday.
The prospect of a showdown at sea with Turkey, a NATO power and, like Israel, an ally of the United States, rattled Israelis already on edge over political upheaval in the Arab world and Iran's nuclear program. Washington has appealed for restraint.