Turkey says can send warships to east Med any time 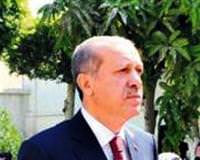 Prime Minister Tayyip Erdoğan said on Thursday that Turkish warships could be sent to the Eastern Mediterranean at any time and Israel could not do whatever it wants there, escalating a war of words over the 2010 killing of Turkish activists.

Ties between the two regional powers have deteriorated sharply since Israeli naval commandos raided the Mavi Marmara, a Turkish ship carrying aid to the Palestinian Gaza Strip.
"Israel cannot do whatever it wants in the eastern Mediterranean. They will see what our decisions will be on this subject. Our navy attack ships can be there at any moment," Erdoğan told a news conference shortly after arriving in Tunis.
Asked if Turkey was prepared to protect any future aid ships, he said: "On the point of navigation in international waters, we will ensure protection at any time of our ships, which can go to other places, not just Gaza."
Turkey's warnings come at a time when Israel is looking to exploit recently discovered offshore gas fields in the area, party in partnership with Cyprus. Turkey recognizes only the breakaway Turkish Cypriot northern part of the island, and has objected to Cyprus's plans.
Ilana Stein, spokeswoman for Israel's Foreign Ministry, said: "We think that Israel's relations with Turkey, heretofore good, are important, and we are not commenting on this or that statement."
Turkey downgraded diplomatic ties with Israel and halted defense trade after the Jewish state confirmed last week it would not apologize for the raid on the Mavi Marmara, which had attempted to break Israel's sea blockade of Gaza.
Two weeks ago a U.N. report deemed the blockade of the Hamas-ruled Gaza Strip a legal means to stem the flow of arms to Palestinians, but also said Israel had used unreasonable force.
In an interview last week with Al Jazeera television, Erdoğan said the Israeli storming of the ship could have been "grounds for war", but that Turkey had acted "with patience".
The prospect of a showdown at sea with Turkey, a NATO power and, like Israel, an ally of the United States, has rattled Israelis already on edge over upheaval in the Arab world and Iran's nuclear program. Washington has urged restraint.
Erdoğan, seeking to expand Turkey's regional influence, is on a tour of Egypt, Tunisia and Libya, where he has so far received an enthusiastic welcome. His criticism of Israel has helped to win him great popularity in Arab countries.