In Libya, Erdoğan woos with one eye on history 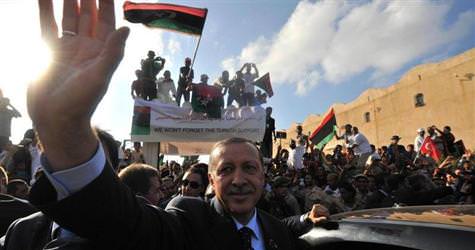 Hundreds of Libyans joined Prime Minister Tayyip Erdoğan in prayer on Friday in Tripoli, heaping praise on him for backing the revolt against Muammar Gaddafi.

The Turkish prime minister, who is promoting Ankara's democracy as a model for North African states, hailed Libya's revolution by invoking a symbol of national defiance and anti-colonial resistance -- Omar al-Mukhtar.
He moved freely among fellow Muslim worshippers a day after French and British counterparts visited the capital amid heavy security. All three leaders are seen seeking influence in Libya, just three weeks after Tripoli was seized by rebel forces.
"Maybe it's in his own interests, but he helped the Muslims, you have to thank him," said Mawloud Mohammed Zgallai, an 84-year-old retired translator crouching at the base of a stone pillar to shield himself from a blazing sun.
"He's a decent man."
A queue of worshippers, many clutching the red and white crescent flag of Turkey, stretched for over a kilometer out of the newly named Martyr's Square.
"(Turkey) hesitated at first to support the revolution, but after he saw that there was support ... from the Libyan masses, he stood by the people," computer engineer Abdulsalaam Mohammed said after waiting for an hour in the queue with his five-year-old son.
"There's no comparison, he is cleaner than any Arab leader."
LANGUAGE OF DIPLOMACY
Erdoğan's visit capped a week of diplomatic victory tours led by France and Britain, whose armed forces spearheaded the air war against Gaddafi.
Turkey earned particular gratitude among the anti-Gaddafi movement when it sent a vessel, escorted by war planes, to evacuate wounded civilians from the besieged port city of Misrata in April. Libya's new rulers may reward them for their support with commercial contracts.
Rebooting business ties is pressing for Turkey, which had contracts worth as much as $15 billion in the oil-rich country, and scrambled to provide the rebel leadership with some $300 million in assistance before the onset of the Muslim holy month of Ramadan.
Erdoğan greeted people gathering in the square in Arabic.
"I salute the heroic grandchildren of Omar al-Mukhtar, who have made history," Erdoğan told a crowd of thousands after finishing prayers.
He was referring to the leader of rebellion against the rule of Italy, in which Libya -- formerly a colony of the Ottoman Empire from which Turkey emerged -- saw a campaign of mass internment.
Noting the day was the 80th anniversary of Mukhtar's execution by the colonial power, Erdoğan linked Libya's present uprising to that of its executed hero, as a struggle for God and country.
"I salute here in Martyr's Square the Libyans who sacrificed their lives for their religion, their country and their freedom."
"I had no words when he said that," said worshipper Abdel Rahman Hafez. "That was a feeling beyond description, even if it only lasts for now. Whatever his motives, I thank him for that."