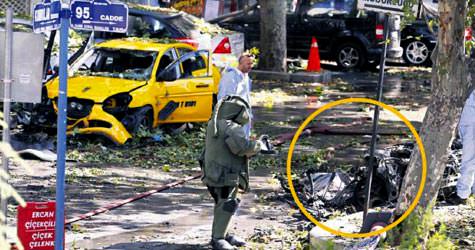 An explosion in the capital city Ankara has resulted in three deaths and 34 wounded, three of which are in critical condition. Terrorist placed a bomb in the trunk of an LPG vehicle Parked in Kızılay, on eof Ankara's most bustling neighborhoods.

A vehicle parked along Ankara's Kızılay Kumrular Street exploded at 11:05 on Tuesday. According to findings, a bomb placed in a Renault Laguna was the cause of the blast which left three dead and 34 injured, three of which are heavily wounded.
The explosion resulted in six other parked cars igniting while also caused damage to a number of buildings located on Kumrular Street. Those wounded in the explosion were admitted to the Numune Education and Research Hospital and the Atatürk Education and Research Hospital. A number of ambulances and firefighters have been sent to the location.
POSSIBILITY OF FURTHER BLASTS
Meanwhile, police have set up a safety line on Kumrular Street under the suspicion there could be further explosions. Local residents and journalists are currently not allowed to pass through the barrier.
Ankara Governor Alaaddin Yüksel has arrived to the scene of the crime to obtain further information regarding the incident.