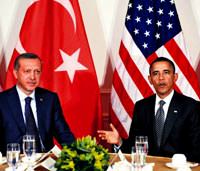 Their talks on the sidelines of the U.N. General Assembly came as a showdown loomed this week over Palestinian statehood at the world body, another source of rising tensions in a region in political upheaval.
Washington has watched with concern as NATO ally Turkey's once-friendly ties with Israel have deteriorated rapidly over Israel's 2010 killing of Turkish activists in a Gaza-bound aid convoy. The crisis has underscored Israel's growing isolation and the new limits of U.S. influence in the Middle East.
"The president underscored his interest in seeing a resolution of that issue between those two countries and encouraged continuing work toward that end," White House adviser Liz Sherwood-Randall told reporters after the meeting, saying Obama also emphasized the need to calm tensions throughout the region.
White House deputy national security adviser Ben Rhodes said Obama would make the same points to Israeli Prime Minister Benjamin Netanyahu when he meets him on Wednesday.
The two leaders also discussed Syria, where President Bashar al-Assad's unrelenting crackdown on anti-government protests has alarmed neighboring Turkey and led to U.S. calls he step aside.
Obama and Erdoğan agreed on the need to increase pressure on Assad and agreed to consult on possible further steps that "could include sanctions, political pressure, other measures," Rhodes said.
Obama and Erdoğan, in their public comments to reporters, focused on deadly attacks in Turkey on Tuesday that they agreed underscored the need for cooperation on counterterrorism.
"This reminds us that terrorism exists in many parts of the world, and Turkey and the United States are going to be strong partners in preventing terrorism," Obama said.
An explosion from a suspected car bomb ripped through a street in the Turkish capital, Ankara, near a neighborhood housing government buildings, killing three people.
Also on Tuesday, Kurdish guerrillas attacked a police college in southeastern Turkey, killing four people in a passing vehicle.
NEED 'TO WORK TOGETHER'
Erdoğan said the United States and Turkey needed to "work together in planning, use technology so that we can continue to take more steps in trying to fight against terrorism."
Turkey is in talks with the United States to provide a base for a fleet of U.S. Predator drones now stationed in Iraq. It is reported to want surveillance drones to carry out operations against Kurdish separatist rebels based in northern Iraq.
The Obama administration is seeking to preserve close ties with Turkey, an increasingly assertive economic and military power in the region that has become a champion of democracy movements roiling the Arab world.
Ankara backed efforts that led to the ouster of Libyan leader Muammar Gaddafi and aids U.S. forces fighting in Afghanistan, and plays a crucial role in neighboring Iraq.
Obama praised Erdoğan for "great leadership" in promoting democracy in the region. But problems remain.
Secretary of State Hillary Clinton urged Turkey on Monday not to do anything to worsen its relationship with Israel.
Israeli-Turkish relations have spiraled downward in recent weeks with the release of a U.N. report on the 2010 flotilla raid, in which Israeli commandos raid killed nine Turkish activists, and Israel's refusal to apologize to Ankara.
Erdoğan's government has expelled Israel's envoy, frozen military cooperation and warned that the Turkish navy could escort future aid flotillas -- raising the prospect of confrontation between Turkey and the Jewish state.
Erdoğan has also kept up a stream of harsh rhetoric against Israel, using a tour of Arab states last week to support a Palestinian bid for statehood at the United Nations and chide Israel as a spoiled client of the West.