This time they killed civilians 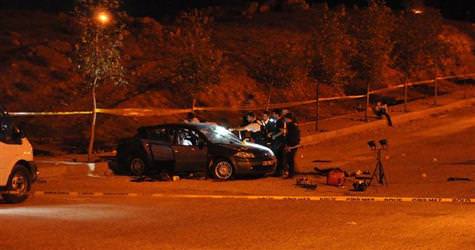 Five PKK terrorists, who were preparing to stage an attack on the Siirt Police Vocational School, attacked a vehicle they suspected was carrying civilian police with long range rifles and a bomb at approximately 20:30 last night.

Four out of the six women that were in the ambushed vehicle were killed while the remaining two were wounded. According to the information obtained, Nergiz Evin, aged 25 and a student at the Department of Physical Education at Hatay University, wanted to hold a farewell dinner for her friends.
At 20:30 last night, Nergiz's sister Nuran Evin (17), her older sister and a hair stylist Zeynep Evin (31) were joined by friends; Gülcan Olgaç (27) a nurse, swimming coach Nurcan Olgaç (25) and security officer Kevser Çekin (25), and were headed to the Tolga Ocakbaşı restaurant, which is located nearby the Siirt Police Vocational School.

When the six women realized they had passed the restaurant by 100 meters, they pulled a U-turn at which point one of the five terrorists waiting to stage an attack on the Police College approached the vehicle and tried to open the door. When the terrorist, claimed to be Mehmet Emin Sevilgen was unable to open the door, he threw the bomb he was holding into the open window of the car. After the explosion the remaining terrorists began shooting at the vehicle. The vehicle was totaled in the explosion, while Nergiz Evin, her sister Zeynep Evin, Nurcan Olgaç and BDP's Siirt Deputy Municiapl Mayor Abdullatif Çekin's niece Kevser Çekin were killed onsite. Heavily injured, Nuran Evin was admitted to the Siirt State Hospital, while Nurse Gülcan Olgaç was airlifted by helicopter to Diyarbakır. The terrorist responsible for throwing the bomb into the vehicle was torn to pieces and killed in the explosion. Soon after, security forces arrived to the scene and initiated an operation to track down the remaining PKK terrorists.