Turkey may slap sanctions on Syria 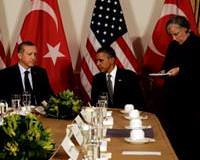 Turkey has suspended talks with Syria and may impose sanctions on Damascus, Prime Minister Tayyip Erdoğan said, the clearest sign yet that Ankara has parted ways with President Bashar al-Assad over his bloody crackdown on anti-government protesters.

After long maintaining close relations with neighbour Syria, Turkey has spoken out increasingly against Assad, urging him to end a military crackdown on a popular uprising and to launch democratic reforms.
It now turns out that Ankara may have already begun controlling Damascus' weapon shipments as well as obstructing certain Syrian aircraft to fly through Turkey's airspace. There is no information however on how many plans have been diverted.
During a tour of Arab countries last week, Erdoğan said that Turkey's approach to Syria had changed and that Ankara would soon announce its "final" decision on Syria by the time the U.N. General Assembly meets in New York.
"I halted talks with the Syrian government. I did not want to come to this point. But the Syrian government forced us to make such a decision," Erdoğan told journalists in New York on Wednesday after meeting U.S. President Barack Obama on the sidelines of the U.N. General Assembly.
"The United States has sanctions regarding Syria. Our foreign ministers will be working together to decide what our sanctions may be," Erdoğan said.
"As a result of this cooperation, the sanctions may not resemble those on Libya. Every sanction differs according to country, people and demographic structure. Thus, sanctions on Syria will be different. We have preliminary studies on the issue," he said..
Assad's attempt to stamp out dissent by having troops and tanks assault restive areas has prompted the United States and European Union to gradually escalate economic sanctions against the authoritarian Damascus leadership.
Turkey, which has been Syria's main trading partner, had resisted sanctions up to now after suffering the consequences of past generations of sanctions imposed on next-door Iraq during Saddam Hussein's rule and now on Iran, another neighbour.
Bilateral trade between Turkey and Syria was $2.5 billion in 2010, up from $500 million in 2004. Investments of Turkish firms in Syria reached $260 million, Turkish official data show.
Turkey, a Muslim member of NATO that has applied to join the European Union, is one of the few countries in the world that has had open communication lines with Damascus.
Under Turkey's policy of "zero problems" with its neighbours, Ankara built up political and commercial relations with Syria after the two almost went to war in the 1990s over terrorists harbored by Damascus.
But with Syrian refugees fleeing to Turkish camps across the border and Assad defying repeated international calls to return his forces to barracks and open up to reform, Turkey has found itself in the awkward position of trying to champion democracy in the region while maintaining ties, especially for trade purposes, with the Middle East's autocratic leaders.
The United States and EU, along with the governments of Britain, France and Germany, have called for Assad to quit.
Erdoğan, who once vacationed together with Assad and his family on the Turkish Mediterranean coast, has stopped short of calling for his departure.
But he told journalists in New York, "We do not have any confidence in the current government," and accused Damascus of launching "dark propaganda against Turkey", while expressing plans to visit the Hatay camp upon his return to Turkey.
The Syrian crisis has pushed Ankara and Washington into closer cooperation, despite U.S. concerns over a fraying of relations between its allies Turkey and Israel.