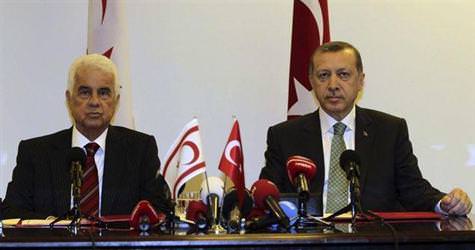 A Continental Shelf Agreement was signed by Erdoğan and Eroğlu in New York yesterday. During an address, Erdoğan also issued a warning to petroleum companies that conduct business with the Greeks.

ERDOĞAN PRESSES THE BUTTON
The second stage will involve Turkey applying for licensing to conduct petroleum and natural gas exploration as well as economic areas of exclusivity as determined by the Turkish Republic of Northern Cyprus. After meeting with Prime Minister Erdoğan the night before last, U.S. President Barack Obama also got together with Israeli Prime Minister Netanyahu. Obama did seek out a solution to the apology crisis between Israel and Turkey however no results were reaped due to Israel's uncompromising attitude. Meanwhile, Erdoğan has gone ahead and pressed the button for a Continental Shelf Agreement. Last night, Erdoğan and Eroğlu signed the deal.
During a speech made at the signing ceremony, Prime Minister Tayyip Erdoğan stated: "This agreement was determined according to a drawing up of 27 geographical coordinates determined in accordance with international law which designates the Continental Shelf for Turkey and the Turkish Republic of Northern Cyprus. The advancing of the eastern and western point maritime boundaries in this agreement was tied to both sides' future and principles of fairness and international law. We also want to warn international oil companies that conduct or want to conduct business with Greek Cypriots. Our Ministry of Energy is working on establishing possible sanctions for said companies including not involving them in energy projects in Turkey.

ATHENS: AGREEMENT IS NOT VALID
Greek Foreign Affairs Ministry Spokesman Grigoris Delavekuras used the expression; "This move from Turkey is against international law and U.N. Security Council decisions. The so-called 'deal' is invalid and groundless," the foreign ministry said in a statement.