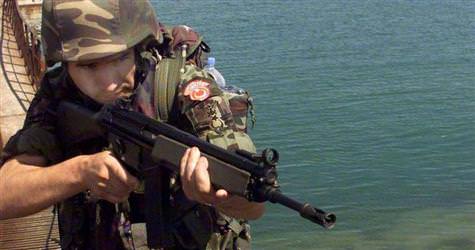 Fifteen thousand of the nation’s youth have applied to serve as contracted soldiers in the struggle against terrorism. For the first stage, 5,000 applicants will be selected to undergo training after which, in April, they will official begin serving as ‘professional’ soldiers.

Upon his return from the United States, Prime Minister Tayyip Erdoğan revealed details of what is to transpire in April for troops posted along the border. According to a number of changes initiated by the General Staff in 2010, border troops will from here on out primarily consist of contracted soldiers. There were 15,000 applicants for the project which aims to establish a younger and more dynamic cadre of soldiers able to fight the PKK terrorist organization at a professional level. Five thousand candidates were selected according to their physical capabilities and then sent to the Isparta Mountain and Commando School for training. The soldiers will be completing their training in March and will begin serving professionally in April. The contracted soldiers will be primarily stationed in the Hakkâri Mountain Commando Brigade, Siirt's 3rd Commando Brigade, Tunceli's 4th Commando Brigade, Hakkâri Yüksekova's 21st Gendarmerie Border Brigade and the Şırnak Çakırsögüt Gendarmerie Command Brigade.
30,000 PROFESSIONALS
The Land Forces Command has since announced plans to hire an additional 5,000 contracted soldiers for the second stage. Applicants may apply until October 21st and must be under the age of 26, they must have completed elementary school and at most be three years past their date of discharge.
Once training has been completed, the number of professional soldiers who will fight terrorists in the mountains will reach 10,000 by the middle of 2012. The number of personnel hires, which will be deployed primarily to border troops is targeted to reach up to 30,000. Males up until the age of 29, that have already fulfilled their military duties, will be eligible to serve anywhere between three to seven years. Contracted soldiers will receive 1,500 on average and will also be paid compensation for operations. overall, contracted soldiers will earn approximately 2,000 lira a month.
PENITENTIARY JOB OPPORTUNITIES
Penitentiaries will also benefit from the experience of contracted soldiers to join the struggle against terrorism. Rambos, whom at the age of 29 have fulfilled their terms of duty, will then be able to work as external security in place of the gendarmerie.
HELICOPTER SUPPORT
Border troops will also be fortified in terms of equipment. Helicopter support will be provided in order to increase border troops' operational capabilities. For this purpose, air troops from the Air Force Military School Headquarters will be primarily serving border posts. The troops will also be supported by İHA aircraft outfitted with night vision capabilities.