‘Turkey’s interests extend to the ocean’ 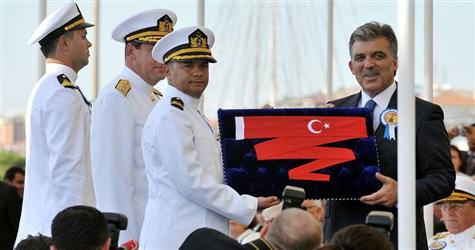 Speaking at a ceremony held for Turkey’s first-ever domestically manufactured war ship being inaugurated to the navy, Prime Minister Erdoğan stated, “Turkey, a country surrounded by three seas, will protect their vested interests to the end.”

Speaking during a ceremony held in honor of the 473rd anniversary of the Preveze Victory as well as to celebrate Naval Forces Day, Prime Minister Erdoğan and President Abdullah Gül both made addresses in which they expressed their pride at the strides made by the nation.
Turkey's first ever domestically produced ship, a result of the National Ship Project (MİLGEM), the TCG Heybeliada (F-511), officially joined the naval fleet during yesterday's ceremony. The second ship in the project, the TCG Büyükada (F-512) was also let to sea yesterday.
President Abdullah Gül, Prime Minister Recep Tayyip Erdoğan, Chief of General Staff Necdet Özel and Minister of National Defense İsmet Yılmaz as well as a significant number of invitees were in attendance at yesterday's ceremony held at the Istanbul Dockyard Command.
Speaking at the ceremony, President Gül expressed the pride they felt and delivered the message, 'If you want peace, then you must be ready for war." Expressing that a nation's strength is dependent on our combined national strength, Gül went on to state, "We are now experiencing the pride of producing our own ship, with our own engineers, technicians and laborers, instead of being dependent on buying from outside of the country. We are a nation that has suffered from this in the past. We have been a nation that has been subjected to weapons embargos from our allies whom from time to time have disregarded our relations. We can now be proud. Turkey does not just make standard weapons; we have begun to produce high-quality weapons with significant fire power that could compete with the outside world." Gül also went on to state: "In order to refrain from war, and in order to prevent fighting, it is necessary to be ready for war."

ONE OUT OF TEN COUNTRIES
Prime Minister Erdoğan also expressed his pride that Turkey has now acquired their first ever war ship in the history of the Republic. "The Turkish flag will continue to be a symbol of peace in the seas and oceans of this world.'
The Prime Minister also drew attention to the fact that Turkey has now joined the ranks of the ten countries that design and manufacture their own warships. "Turkey is no longer a country that keeps to itself, claiming we are surrounded by enemies on all four corners. Our interests span all the way to our surrounding seas, to the Suez Canal, and from there to the Indian Ocean. "
In fact, we immediately took measures against the Greek Cypriots' one-sided intentions to explore for gas in the Eastern Mediterranean. We are well aware that we are a big and powerful country. We designate our policies with the appropriate grandness and strength."
The TCG Büyükada (F-512), the second warship produced out of a total 12 planned in the MİLGEM project, was put to sea yesterday and will join the naval fleet in 2013. The Heybeliada ship, which was inaugurated yesterday to the Turkish Navy, will be based in the Mediterranean. Contrary to other ships, the Heybeliada has the capability to approach targets at a much closer range before being detected.